Command over the Wheelers

Guarding the Powder of Life.

Become Queen of Oz (both failed).

Princess Mombi is the head-switching, beautiful and tyrannical sorceress who commands the maniacal Wheelers, and she is also the secondary antagonist behind the Nome King, who attacked and took over the Emerald City of Oz in the 1985 Disney film, Return to Oz. She is based off her original incarnation with the same name.

She was portrayed by Jean Marsh (as well as Sophie Ward and Fiona Victory), the same actress who also plays Head Nurse Wilson in the mental hospital where Dorothy is committed at the beginning of the movie and is best known for the role of Queen Bavmorda in the 1988 fantasy film Willow.

Princess Mombi is a dark-haired, deranged and evil middle-aged sorceress. She is a coward at heart who grovels before the Nome King and begs for her life when he is displeased with her. She is also frightened by Jack Pumpkinhead when she first sees him. She makes a deal with the Nome King, for if she trapped Princess Ozma in her enchanted mirror, he would make her the queen of Oz and gives her thirty beautiful heads which she could switch depending on her mood.

He also gives her the Emerald City as her own kingdom, after he took away the emeralds. She also guards the Powder of Life. When Dorothy encounters "Princess Mombi" in her palace, Mombi develops a fondness for Dorothy's head and locks her in the tower, planning to remove her head and take it once the girl has reached adulthood. Dorothy, however, escapes and steals the Powder of Life from a case which also contains Mombi's true head.

Unfortunately, she awakens the head which screams Dorothy's name, awakening the other heads in turn which all begin screaming, ultimately awakening Mombi's headless body which pursues Dorothy who manages to escape. Donning her true head, Mombi sends her sinister minions, the Wheelers after Dorothy. At the climax of the film, the Nome King imprisons Mombi in a magical cage for failing him.

When the Nome king is manages destroyed Mombi is stripped of all her magical powers (rather than Glinda taking them away in the original story). When Princess Ozma is freed from her prison she forgives Mombi because she feels the loss of her powers (presumably her head-changing superpower) is punishment enough. 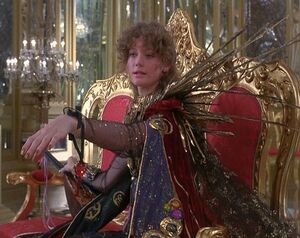 Princess Mombi using one of her fake heads to disguise herself as a young, beautiful woman. 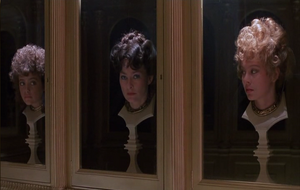 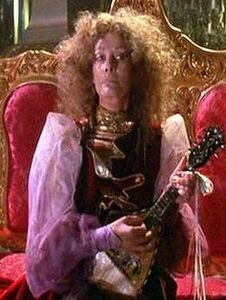 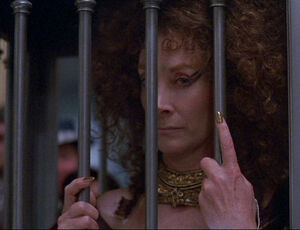