To help the Ringmaster in taking over the world.

Zelda DuBois joined Ringmaster's Circus of Crime soon after the Circus began encountering such superheroes as Spider-Man, Daredevil and Hulk.

Dissatisfied with the Ringmaster's leadership, she was responsible for him being thrown out and the Clown being declared their new leader When Spider-Man investigated the Circus of Crime and ended up fighting them, one of the members, Princess Python ran away and Spider-Man tried to be a gentleman, not fighting a woman and instead pleaded with her to surrender. While Spider-Man was knocked into her snake pit, the Ringmaster decided to get revenge and knocked the Clown out cold making his way out with the treasure. The Ringmaster was caught red-handed with paintings and the rest of the gang including Princess Python was rounded up by the police.

Shortly afterwards, she aided the Circus in attacking the Avengers Mansion during the wedding of Hank Pym and Janet Van Dyne. While the Princess's snake was vital both in the scheme and in its execution, the Circus was defeated and arrested, with the Princess being beaten by Van Dyne herself.

She soon joined the Serpent Squad, but the Squad was defeated by Nomad. Princess Python rejoined the Circus of Crime until being recruited by Sidewinder for his Serpent Society. When the Society undertook a mission to assassinate M.O.D.O.K., Princess Python panicked and fled the scene, coming across Captain America. Princess Python told him that she couldn't go through with the mission, as unlike the other serpents, she was just a snake charmer and had no powers or fighting skills. Captain America let her go, but the Society caught up with her. They expelled her from the Society, wiping her memory of their secrets. When her teammate Death Adder was delivering her to the Circus of Crime, his Serpent Saucer crashed and he flagged down a cab, leaving Princess Python in the saucer. The cab driver, however, turned out to be the Scourge, and killed Death Adder. Princess Python, who had been left behind, survived.

Zelda was apparently killed by a car bomb left by her own son, Daniel, but she somehow survived and joined Shadow Council's Masters of Evil along with many other super-villains. 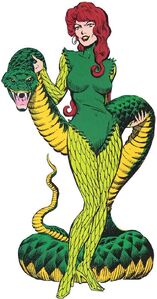 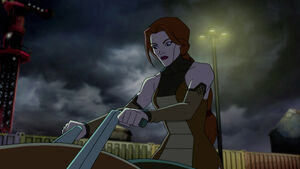 Princess Python in Avengers Assemble
Add a photo to this gallery

Retrieved from "https://villains.fandom.com/wiki/Princess_Python?oldid=4100524"
Community content is available under CC-BY-SA unless otherwise noted.