Princess of the Shroobs

Driving joy from the pain of her enemies.

Wipe out the Toad race.
Kill the Mario Bros. and Princess Peach (both failed).

Princess Shroob is the main antagonist of Mario & Luigi: Partners in Time. She is the younger twin sister of Elder Princess Shroob and a princess of the Shroob race. She is the one who leads the Shroob's attack on the Mushroom Kingdom and became the supreme head of the invasion after her sister was sealed in the Colbalt Star.

It all started when the Planet Shroob was withering and dying, and in order to find a new place for their people, the two Princess Shroobs attacked the Mushroom Kingdom in the past. When Princess Peach (who was traveling back in time) trapped Elder Princess Shroob inside the Cobalt Star and broke it into shards, Princess Shroob took over as leader of the Shroobs. She launched a missile to take down Baby Bowser's Koopa cruiser in an attempt to kill him, Peach, and the Mario Bros. (both past and present).

Mario, Luigi, Baby Mario, and Baby Luigi eventually entered the Shroob Castle (Peach's Castle in the past, taken over by Shroobs), reaching the top to find an imprisoned Princess Peach, who tried to warn them. However, before she could say anything, Princess Shroob angrily commands the Mother UFO to exterminate them as they are shooting the castle. Quickly thinking, the Mario Bros. use will another UFO to damage the attackers, causing it to crash through the castle and the destroy barrier that has kept Princess Peach sealed. Now enraged, Princess Shoob challenges the heroes to a final battle, dead set on seeing them destroyed. After her defeat, Princess Shroob watched the Mario Bros. and Peach attempt to escap,e only to be stopped by the Cobalt Star, who will be completed by Baby Bowser. Watching this, with only small energy left, Princess Shroob crawls to the Cobalt Star and expresses her last wish, before she collapses and dies.

Princess Shroob will first start on her throne which is covered by a pink-red sphere that protects her from any attacks, this sphere will change from blue to pink and then explode causing the throne to malfunction and forcing Princess Shroob to fight on foot.

Despite this, Princess Shroob will reuse her throne, which gains three legs becoming a mecha. It walks and stands above Mario or Luigi to shoot more lasers from below the throne that can be avoided by jumping. After this, she tries to crush them with the mecha that can be prevented by using the hammers. If she laughs at that moment, she will stop before touching them to make them miss with their hammers on purpose. If failed, either Mario or Luigi can temporarily suffer a dizzy effect from the massive attack, leaving them also vulnerable in combat. After these attacks, Princess Shroob will be protected again with a blue sphere, she will attack shooting lasers from the throne that can be avoided by jumping.

As she walks on foot, Princess Shroob teleports to shoot energy balls at both the Mario Bros. that have to be jumped over. She will occasionally teleport in front to shoot quickly at one of them with an energy ball. Princess Shroob also teleports above them to shoot down an energy ball that can be deflected to with the hammer causing her damage. She'll also use a purple star attack that won't stop until it hits its target. It must be jumped on, but it loops back and accelerates if it is dodged entirely, being destroyed if it makes contact. Princess Shroob will switch between aiming at Mario and Luigi with the purple star as it accelerates.

When she is close to being defeated, she starts to shine, becoming more stressed as the battle goes on.

Princess Shroob appears in the Mario & Luigi: Partners in Time adaptions in the Super Mario-Kun manga (volumes 35, 36, and 37), serving the same role as she does in the game.

In Super Smash Bros. Ultimate, Princess Shroob appears as a neutral primary spirit. Her battle is a Stamina battle against Peach on Princess Peach's Castle who grows to giant size and gains increased attack power once her health has dwindled halfway.

Princess Shroob is a very sadistic, cruel, ruthless, and magisterial tyrant who likes to cause suffering to others. This is shown when she ordered her Shroobs to destroy the Koopa Cruiser, tried to feed Princess Peach to Petey Piranha without mercy, and was even possible for the destruction of the Mario and Luigi from the future. After the Shroob Mothership was destroyed, the princess emerged insane with revenge. Although she has an argumentative and tyrannical attitude towards her enemies, Princess Shroob appears to care more about her kind's future than her sister, the Elder Princess Shroob, although this is just out of pragmatism.

Princess Shroob is able to make energy balls, increase her size, fly, teleport, and control Stars when she is battling against her enemies, however she's much taught than she may seem, her own stamina and durability are much higher and coupled with good endurance, it makes her the second most pain-tolerable Shroob.

With her sharp intellect, she's able to come up with most strategies, if anything, hadn't Bowser interrupt her plan, she would've successfully destroy everyone during events of her being disguised as Princess Peach, being the most competent tyrant, right before Fawful. 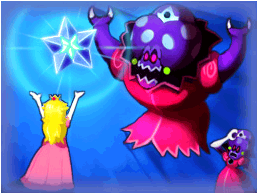 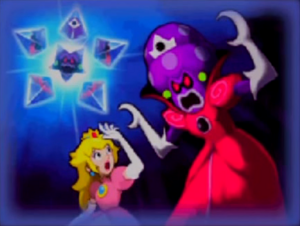 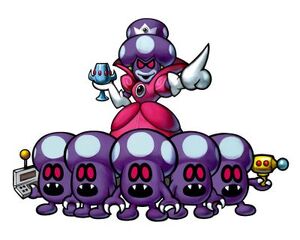 Princess Shroob and some Shroobs attacking from Mario & Luigi: Partners in Time. 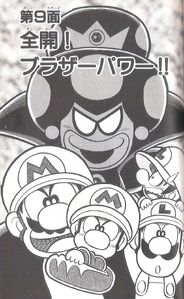 Princess Shroob as she appears in volume 35 of Super Mario-Kun. 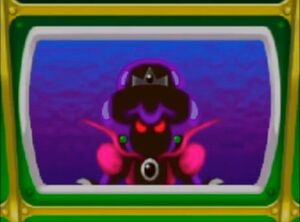 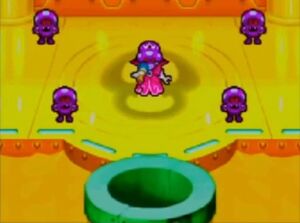 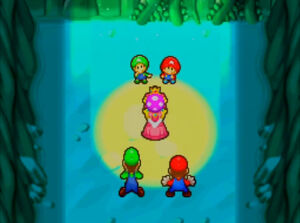 Princess Shroob disguised in the credits.

Bowser kidnapping the princess, unaware that it's Princess Shroob. 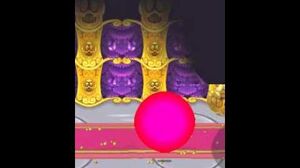 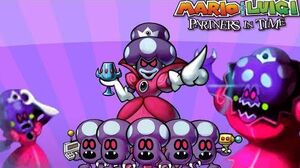