Princess Tosatsu (also known as Totsusahime) is a false secondary antagonist to supporting character of 2013 game Wadanohara and the Great Blue Sea (as well as the 2020 re-release of the same name), she isn't really a villain despite of being a antagonist.

Before the Events of the game little is known about her past except that she is the Daughter of Artamos and a unknown mother (who was never seen in game).

However, despite being redeemed, she is still defeated by almost drowning in the sea kingdom since a spell that was put on her before she entered the kingdom that made her breathe underwater wore off.

Despite this, she along with other members of the Tosatsu kingdom and the Demons return to help the Sea Kingdom to defeat the Sea of Death.

After the events of the game she had matured a bit and possibly made the spell that made her breathe underwater permanent.

Princess Tosatsu wears a red furisode with a gradient pattern and red kimono sandals. She sports a rabbit ear headband to go with her kingdom's rabbit theme. She has long brown hair reminiscent of a hime cut. Her fingernails are painted red.

Princess Tosatsu has a childish personality. She is cantankerous, bad-tempered, and argumentative, which was reflected when she received a letter from "Uomi" and went on to hire demons and invade the Blue Sea kingdom on the intent of slaughtering Uomi.

Tosatsu in the chapter title

Tosatsu's bio in the bonus room 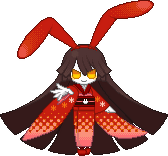 Retrieved from "https://villains.fandom.com/wiki/Princess_Tosatsu?oldid=4188596"
Community content is available under CC-BY-SA unless otherwise noted.