Become powerful and to make sure her legacy will endure (long-time goal).

Principal Abacus Cinch (simply known as Principal Cinch) is the main antagonist of the third film in the “Equestria Girls” full-length film franchise My Little Pony Equestria Girls: Friendship Games. She was the headmistress of Crystal Prep Academy.

She was voiced by Iris Quinn.

Principal Cinch first appears, calling Twilight to her office through Dean Cadence. She talks with Twilight about her application for Independent Study Program, admiring her as the best student the academy ever had. However, she then points that Twilight has to compete in Friendship Games, which will strengthen the academy's influence, as it always was. When Twilight tries to say that she's just a researcher and doesn't want to compete, wasting her time, Cinch tells her that she has influence due to the academy's high social status. The principal points that she can use that influence to get Twilight's application approved faster or even denied at once if she won't take part in Friendship Games, forcing Twilight to do so.

In Canterlot High School, Principal Cinch first spends some time talking with Principal Celestia, as the latter shows her the school upgrades. They end up seeing Human Five and Sunset Shimmer chatting with confused Twilight, only for Cinch to reveal that the one is her best student, apologizing for her curiosity. After that incident, Cinch forbids Twilight to make friends with the Canterlot High students. Principal Cinch also ruins Pinkie Pie's welcoming party, forbidding her students to have fun, and Pinkie actually couldn't do anything at the moment, as Twilight accidentally drained her Laughter Magic which makes Pinkie to tired to oppose the principal (though she actually the one who could do that with her personality).

During the main action of the games (in song "Acadeca"), Cinch observes her students' work and gets angry or disgusted anytime they fail to win, like in bakery competition, which was won by Pinkie Pie and her tremendous "Mona Lisa" cake. While Principal Celestia, Vice-Principal Luna and Dean Cadence judge the most of the competitions, Principal Cinch judges the last one, math competition between Sunset Shimmer and Twilight Sparkle, pointing out that Sunset's answer is incorrect.

Then, Principal Cinch instructs the remained Shadowbolts before Tri-Cross Relay, inspiring them to victory and hoping that Twilight could deal with the first part of the relay, which is actually the P.E. standard for Crystal Prep Academy. However, Twilight fails miserably, not being able to high the bulls-eye with and arrow, which enrages her classmates, but she is helped by Applejack, who then gets pony-up for her honesty, which was accidentally drained by Twilight. The latter drops her pendant which opens several random portals to Equestria, releasing the Everfree Forest into this dimension. It crushes the track, nearly killing Sunset Shimmer and Sugarcoat in process, as Rainbow Dash and Indigo Zap prove themselves to be more competent racers. However, Rainbow saves Sunset, getting pony-up, and then Sunset wins the race. Principal Cinch blames the Wondercolts for magic cheating, however, Celestia tries to convince Cinch that no one had advantage due to that. A bit later, Principal Cinch witnesses Twilight draining Rainbow Dash's magic and learning that she drained much magic yet.

Before the final competition, Principal Cinch and the Shadowbolts trying to convince Twilight in releasing the magic to the point of enforcing her to do it in their villain song "Unleash the Magic". However, the magic goes unstable and corrupts Twilight, as everyone, including Cinch, look at that in horror. Twilight transforms into horrifying Midnight Sparkle, and Cinch, understanding what monster has been created, retreats in save position, advising the Shadowbolts to do the same when Sunny Flare actually catches her.

After Midnight Sparkle is defeated, Cinch accuses the Canterlot High School for magic cheating once more and demands that Celestia and Luna forfeit the Friendship Games, threatening to report the incident to the school board. However, she is mocked by the others, as even the Shadowbolts turned on Cinch, implying that she was the one responsible for Midnight Sparkle's creation, and also, no one would believe her claims about "flying girls, magic or talking dog (referring to Twilight's Spike)". Though Cinch is enraged, she than saves her face and leaves in defeat, most probably leaving to Crystal Prep the next day with the other students and Dean Cadence.

In the special "Dance Magic," Sour Sweet mentions that Cadance has taken over as the Principal of Crystal Prep, meaning that Principal Cinch either quit, retired, or was fired by her superiors for her actions.

Principal Cinch is the haughty principal of Crystal Prep Academy, taking her students and culture in pride but prides itself mostly on the awards her school receives when winning the Friendship Games. She also considers the human Twilight Sparkle her prized student since she receives the most high scores in her school, but when she discovers magic withheld in her, she reveals herself to be an evil, competitive woman who has no reservations of exploiting her students and cheating in the Friendship Games. When Twilight transforms into Midnight Sparkle, Cinch proves to be a coward when she tries to bail. 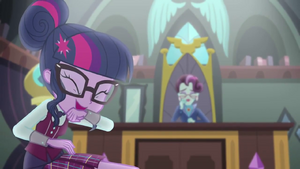 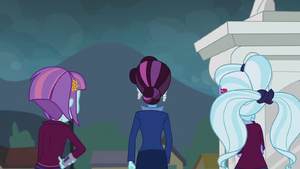 Cinch defeated.
Add a photo to this gallery 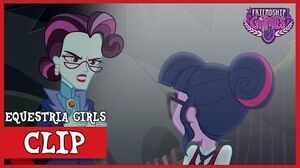 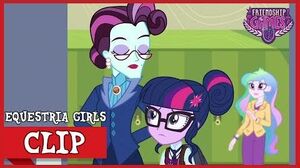 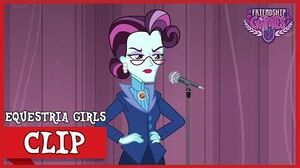 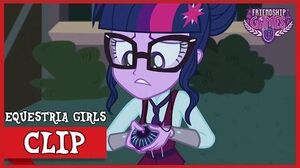 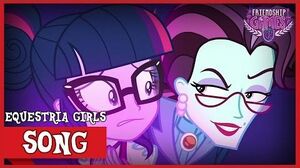 Retrieved from "https://villains.fandom.com/wiki/Principal_Cinch?oldid=3299435"
Community content is available under CC-BY-SA unless otherwise noted.