Retrieve the time capsule that has misprints in it and claim it for himself (failed).

Principal Deedle is the main antagonist of the Scooby-Doo! The Mystery Begins. To steal a rare stamp, he impersonated the Dark Specter.

He was portrayed by Shawn MacDonald.

Principal Deedle's Dark Specter costume was a black cloak with a white mask. While's he not in disguise he wears a brown suit with a bow tie.

Deedle used the Dark Specter disguise to scare his students away while he searched for a rare stamp called the "Erie Stamp", which was a misprint, and that it was buried in a time capsule below his school with the help of two real ghosts named Prudence Prufrock and Ezekial Gallows.

However Fred Jones, Daphne Blake, Velma Dinkley and Shaggy Rogers were blamed for his plans and were suspended then later expelled from Coolsville High. With the help of Scooby-Doo, they later returned, cleared their names, rescued Vice Principal Grimes and defeated Deedle.

After his evil plan has been foiled, it was presumed that the gang alerted the authorities and the superintendent about Deedle's crimes and had him terminated and arrested. Then Vice Principal Grimes becomes the new principal and unexpells Fred and the gang, declares them as heroes for saving Coolsville High, and apologizes for accusing them. 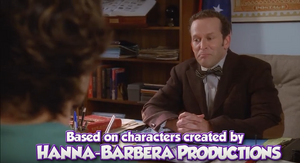 Deedle talking with Shaggy in the intro. 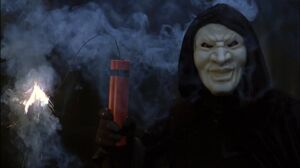 The Specter holds a stick of dynamite. 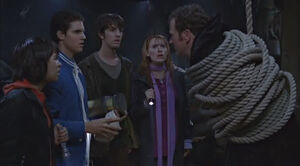