Corrupt Official
Principal Wallace "Wally" Q. Farquhare is an antagonist-turned-anti-hero from The Cleveland Show. He is the frail and dorky principal of Stoolbend High School. He makes up for his lack of dignity, by running the school in a controlling, dictatorial manner, often fathoming arbitrary rules and cracking down on "cool kids" for minor offenses.

He was voiced by Will Forte, who also voiced Chester V in Cloudy with a Chance of Meatballs 2.

As shown in "Field of Streams", Wally knew Cleveland Brown when they were still in high school back in 1984, and he was still his nerdy, dishonorable self. Cleveland bullied Wally repeatedly, though never more notably than after he threatened to rat him and Terry out for drinking beer on school property. Cleveland chased Wally down the sidewalk, intent on beating him up, which made him trip, break his computer, and, out of fear, wet himself, getting urine all over his thigh and pocket contents.

Farquhare vowed revenge on Cleveland, and his day came twenty-five years later, when Cleveland coached the baseball team at Stoolbend High School, which he now ran as the principal. At the school's first baseball game, Wally took Junior to the game, telling him it was a math class, so he could witness his revenge on his father. Wally threatened to set fire to Cleveland's beloved baseball jersey, which he wore back in their high school years. Fortunately, Junior stood up for his father, tackling him and taking the jersey back. Principal Farquhare then proceeded to insult Junior, calling him a "chubby loser," provoking Cleveland to chase him again, intent on beating him up once more, and recreating the same pants-wetting event from before. Principal Farquhare soiled his thigh and pocket contents again, in front of everyone at the baseball game, and they all laughed at him, Wally having now been humiliated in front of the entire school. 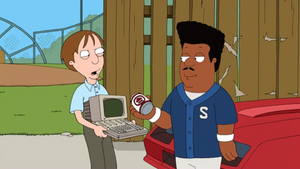 Wally and Cleveland, first meeting as high schoolers in 1984. 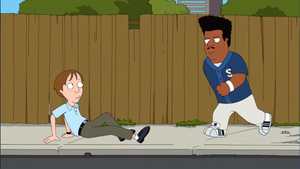 Cleveland beats up Wally for trying to snitch. 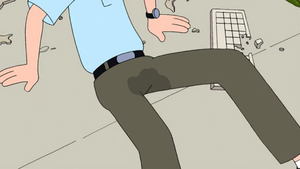 Wally wets his pants, soiling his thigh and pocket contents. 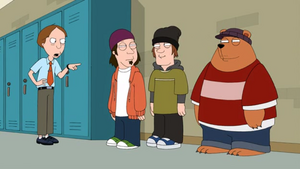 Principal Farquhare being an obnoxious principal. 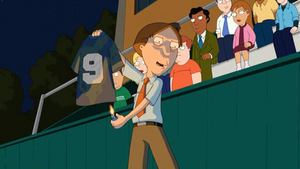 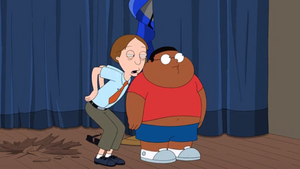 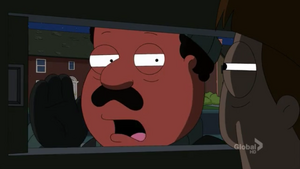 Cleveland works in cahoots with Wally. 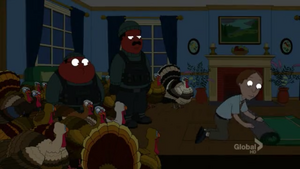 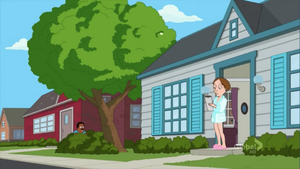 Cleveland throws an egg at Wally. 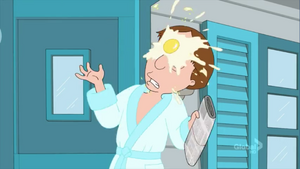 Principal Farquhare's cameo in the Family Guy episode, "No Giggity, No Doubt".