Getting Beavis and Butt-head in trouble.

He was voiced by Mike Judge, who also played many other characters in the show, including the title characters.

As the principal of Highland High School, McVicker is arguably Beavis and Butt-head's arch-nemesis. McVicker is shakey and hates the two. At times, he becomes so shaky like an elderly old man (except that he's in his mid 50s) and upset that he has to take pills or drink alcohol to calm himself down, or on rare occasions, smoking cigarettes. The duo has unintentionally ruined McVicker's life and drove him to the edge of insanity, as shown in Breakdown. Some episodes begin with Beavis and Butt-head in his office. McVicker is known for constantly trembling and stuttering out of anxiety over Beavis and Butt-head, their antics, and his inevitably futile attempts to punish them. McVicker wore glasses and a suit. It is also revealed that he had a family.

In the season 7 finale, upon hearing the news of Beavis and Butt-head's "deaths", he stopped trembling and stuttering for the first time. He celebrated their 'deaths' by putting on the "Ricky Martin's Cup of Life". When they showed up to their own memorial services, very much alive, he suffered a heart attack. However, he survived that heart attack as shown after the series was revived after thirteen years of cancellation.

However, he still has a small modicum of hope left for the duo, or at least Beavis. In the episode, The Great Cornholio, when Beavis mumbles an apology, McVicker was so pleasantly surprised that he let Beavis go, without any punishment. This likely went away after Beavis reverted to his Cornholio persona at the end of the episode.

McVicker is an overweight middle-aged man, somewhere in the 50s to 70s, who used to have dark hair, but afterwards, he became bald. He has blue eyes that he often widens due to his trembling fits. He wears a gray business suit with a green tie, a white shirt, black shoes, and glasses. 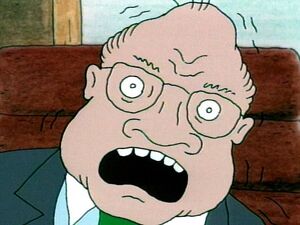 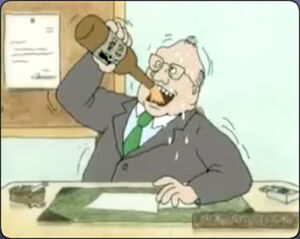 How do I fix you idiots for good? Simple! (presses the intercom while drinking) Uhhh... Get me, Coach Buzzcut! He's gonna help you guys! 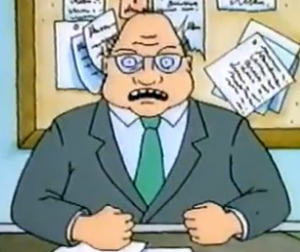