Inmate at the federal correctional institution in Miami

The Prison Boss is a minor antagonist in the top-down shooter video game Hotline Miami 2: Wrong Number. He is a muscular and intimidating prisoner who tries to kill Richter Berg during the beginning of a prison riot, serving as the boss of the level "Release".

Standing out among the rest of the typical prisoners seen in "Release", the Prison Boss is a large and extremely muscular man with a long, brown beard which he keeps tied up, grey eyes and a buzz cut. He wears a standard prison uniform with orange trousers and a white tank top underneath, but keeps the rest of his overalls tied around his waist. Notably, the Prison Boss appears to have a tattoo of the 50 Blessings logo on the side of his neck, as well as a tattoo of the number "50" underneath his left eye, heavily implying that he not only endorses American supremacy, but is also loyal to the terrorist organization's cause.

Very little is known about the Prison Boss in general. Based on the 50 Blessings tattoos he has, he may have possibly worked for the 50 Blessings organization as a masked operative prior to being incarcerated, or at the very least supported their cause and was imprisoned for other reasons. While the imprisoned 50 Blessings operative known as Richter waits at the visitation booth for his trial concerning his crimes committed against Jacket and the Russian Mafia, he is mysteriously visited by the Janitors. They thank Richter for serving them and bid him farewell, much to his confusion before leaving.

Due to the odd timing of the prison riot, the guards forcing Richter into the basketball court and the Prison Boss trying to kill him shortly after the Janitors' arrival, it is assumed that the Janitors had conspired to kill Richter by orchestrating the riot and using the Prison Boss as their agent to carry out the hit. 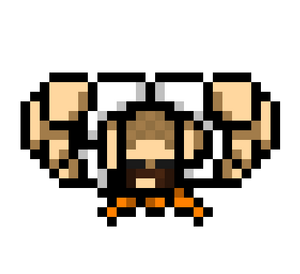 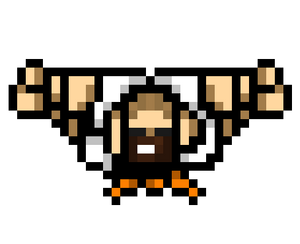 The Prison Boss flexing his muscles. 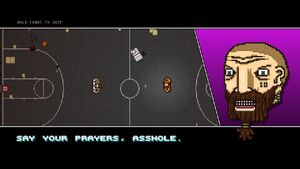 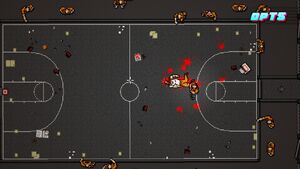