Superhuman athlete
Above-average agility and speed
A Shield with the H.I.V.E. Symbol

Destroy the Teen Titans
(both failed)

Private H.I.V.E is an antagonist in Teen Titans cartoon series and is part of the H.I.V.E. Five. He later leaves the group and joins Brotherhood of Evil.

Private's name is unknown but he joined H.I.V.E as Private with a military personality and finishing his line with sir. Private fought the Teen Titans multiple times and uses his shield for attack and defense. Private formed the H.I.V.E. Five along with Jinx, Mammoth, Gizmo and See-More and later joined the Brotherhood.

Private along with the Brotherhood members went to see Robin get frozen by the Brain but later figured out Cinderblock was under Jericho's possession when he talked. Jericho and friends knocked Private out. Private was frozen and defeated in the final battle.

Private also appeared in the Teen Titans comics where he becomes his own boss and forms his own team of supervillains as his foot soldiers. He also promotes himself as Sergeant Hive. 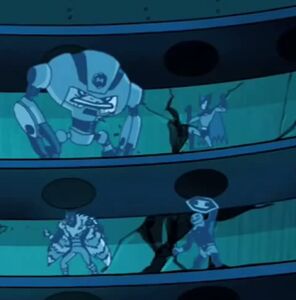 Private H.I.V.E. frozen along with other villains.