Professor Brainstorm is one of the secondary antagonists of the mobile game Plants vs. Zombies Heroes. He is a zombie professor who leads Brainy and Crazy classes.

Not much is known about Professor Brainstorm's origin, and who is his zombie fighter counterpart.

Professor Brainstorm appeared in A Schooling at Zombie U teaching the zombies how to eat more brains. When Green Shadow, Grass Knuckles, and Spudow attempted to stop him from doing so, the professor unleashed his Teleporter to summon the zombies to stop them. However, Spudow defeated Professor Brainstorm by using his explosive head to destroy the machine. He can be seen writing on his board not to teach zombies to eat brains.

Unlike an ordinary zombie, Professor Brainstorm is highly intelligent, as he can build any technological devices to fight the plants. His greatest invention was the Teleportation-ator, as he can teleport zombies to aid him in battle, in the mirror of Eureka. 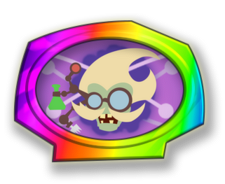 Eureka
Add a photo to this gallery

Retrieved from "https://villains.fandom.com/wiki/Professor_Brainstorm?oldid=4145339"
Community content is available under CC-BY-SA unless otherwise noted.