Knowledge of Physiology and cybernetics

Professor Brown is a scientist working for Black Ghost and a minor antagonist in the Cyborg 009 series. He was the original head of the 00 Cyborg Development Team. He only appears in the episode "Black Ghost Lives". Despite his minor appearance, he is the one who convinced Dr. Gilmore to originally join Black Ghost, making him a huge part of his backstory.

Professor Brown was originally a Nobel Prize-winning scientist whom Dr. Gilmore looked up to. Secretly, Brown had faked his death in a car crash in order to join Black Ghost and continue his research unimpeded.

Brown first approached the young Isaac Gilmore after a heart surgery the surgeon attempted failed. Showing him his own model of artificial heart, Brown convinced Gilmore to join Black Ghost to continue his research unscrupulously.

Brown was later placed in charge of the development team for Black Ghost's new line of 00 designated cyborg soldiers. Brown initially considered Jet Link, then designated as "Prototype D6" to receive the "Cyborg 001" designation, but when Jet was deployed into a test battlefield, Brown and his team observed that his Accelerator was limited in its potential, despite Jet's impressive reflexes.

Later, Brown had Ivan Whisky transferred from Dr. Gamo Whisky's "Mutant Warrior" project over to the 00 Cyborg line, desiring to have a psychic project. Ivan was given the designation of "Cyborg 001", while Jet was named "Cyborg 002" instead. Brown later received designs from Gilmore for enhanced sight and hearing, which Brown noted as impressive. Gilmore insisted that they use the concept for their next cyborg, Cyborg 003, to which Brown agreed. Gilmore then asked to be the one to conduct the surgery as well, which Brown also agreed to.

Brown later had Cyborgs 002, 003 and 004 placed in a combat simulation on a test battlefield to test out their abilities. Though they performed well initially, they soon began to suffer malfunctions due to the limits of their technology, and Brown reluctantly had them placed in cryo-stasis until newer technology was produced that could advance their cybernetics. Brown died of old age not long after, never being able to see the results of his project. Following his death, Dr. Gilmore became the new head of the 00 Cyborg Development Team. 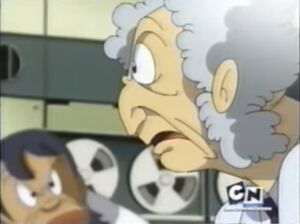 Retrieved from "https://villains.fandom.com/wiki/Professor_Brown?oldid=2701774"
Community content is available under CC-BY-SA unless otherwise noted.