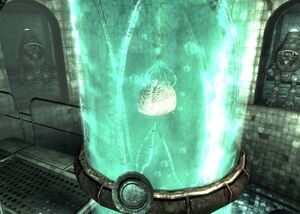 Professor Calvert is the main antagonist of the Fallout 3 expansion Point Lookout.

He was voiced by Craig Sechler.

Calvert is a fictional member of the influential real-life Calvert family who now exists as a disembodied brain hooked up with psychic technology in an underground lab beneath a lighthouse in Point Lookout, Maryland. He is the longtime rival of a foul-mouthed Ghoul named Desmond Lockheart, who lives in the old Calvert family mansion. Calvert employs a local group of tribal cultists, who worship him as a god, and whom he communicates with using his psychic powers. Calvert sends a group of tribals to attack the Calvert Mansion where Desmond is, but the player helps Desmond stop them. Later, Desmond and the player install a jamming device on top of a ferris wheel that blocks out Professor Calvert’s telepathic abilities, but then Calvert blows up Desmond’s mansion, killing his dogs.

The player and Desmond then go to the light house to finish Calvert off, and when they reach the chamber where his brain is he turns out to be almost completely defenseless – the only robots guarding him are Protectrons, and most of them don't even work. Here, Calvert tells the player to kill Desmond for no reason in a last attempt to stop his rival, and even if the player is foolish enough to believe this and do kill Desmond, Calvert still turns on the player afterwards and tries to kill the player, but still has next to no working defense systems and is then killed easily as usual.

Retrieved from "https://villains.fandom.com/wiki/Professor_Calvert?oldid=3221783"
Community content is available under CC-BY-SA unless otherwise noted.