Guardian of the Great Library (formerly)

Armed with a magic pen

Use the magic pen to summon an entire army of monsters from the books in the library and use them to take over the world.

Eliminate Lex and the oracle Cassandra (all failed).

Codex is an anthropomorphic stork who uses the Magic Pen and initially helped Lex the Bookworm in the first two books. However, after he revealed his true nature in the third and final book, he became the final boss of the game. He is in fact a villainous mastermind who's looking to use the Magic Pen to summon a monster army for world domination. He is also Lex's archenemy.

Pests in the Great Library

Professor Codex orders Lex to get rid of all the literature characters causing havoc in the library. After Lex faced his final enemy Odin, Codex possibly thanked him for doing so.

Wanting world domination, Codex planned to use the Magic Pen to summons monsters from the books to achieve this. Fearing that Cassandra the Oracle would be a threat, Codex used the pen to seal her inside the first book, which was about Ancient Greece. When Cassandra called out for help via a message in the book, Codex called Lex and showed him. He convinces Lex that Cassandra needs help, because she is captured by Medusa. He uses his Magic Pen to send him into the book.

After Lex defeats Medusa, Cassandra attempts to warn him about Codex's true nature. However, Codex arrived, disguised in a red cloak, and silenced Cassandra by snatching her away. He then quickly sealed her inside his Magic Pen. As Lex returned, he tells him the the true villain "drains essence", Codex instantly said it was Dracula that was the mastermind, only so that he wanted Lex to further disrupt the books so he can summon his army. He then sent him into another title "Arabian Nights".

After Lex returns with the Scimitar of Justice, he sees Codex being transported to Dracula's Castle. He is able to follow him before the book closes. However, little did Lex know was that Codex did that to ensure that he would believe his theory.

After Lex defeats Dracula, he finds Codex wearing a familiar cloak. As they return to the Great Library, Codex reveals that he kidnapped Cassandra and was manipulating the entire time. He further explains that since he travelled through the three books and defeats their monsters, he would have better control over them. This way, he could build an entire army of literary characters to take over the world. Lex is able to defeat Codex and his summoned monsters.

Losing what's left of his sanity, Codex attempted to destroy him, keep Cassandra trapped and summon an even greater army of villains to unleash and heroes to enslave by using every literary book in the Great Library. However, just before he was able to do so, Lex used the word "Hippopotomonstrosequipedalian" to overpower him and trap him inside the Magic Pen, therefore defeating him once and for all.

After Codex's defeat, the monsters he enslaved were freed and returned to their books. Cassandra then made Lex the new Guardian of the Great Library following Codex's betrayal.

At the end of Bookworm Adventures, Vol. 2, the Magic Pen was exhausted due to being used by a machine as a fuel for power. Therefore, it would have to hibernate itself so it can heal. It is unknown what became of Codex due to still being sealed inside the pen.

Professor Codex is the final boss in the game. The beasts he will summon are Cerberus, Medusa, Shaitan, and Wolf-Man. All four have ten hearts, but are still just as powerful as they were before. Codex, however, is deadlier to defeat because the player must have enough potions. He is immune to three to four letter words. His first move depends on how the player defeats his minions: if the player knocks them all out quickly with large words, he will use his Pen Blast first; but if the player defeat his minions more slowly, he might use Book Slap instead. 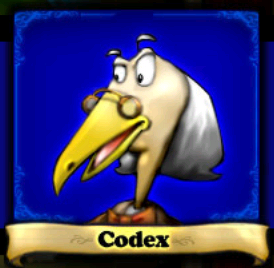 Codex's character box throughout most of the game. 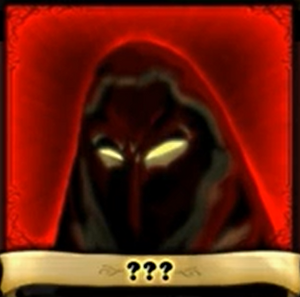 Codex's portrait while being cloaked. 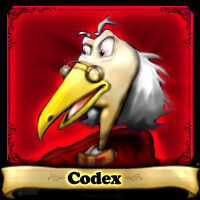 Codex's new character box after being "rescued" from Dracula. 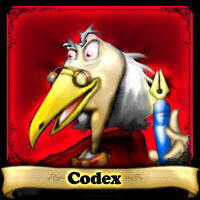 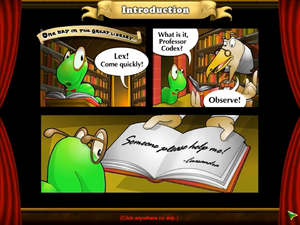 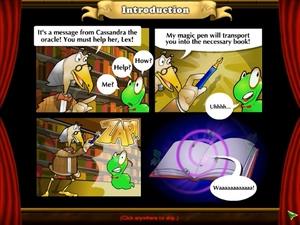 Codex using his Magic Pen to send Lex into the book.

Codex (whilst cloaked) revealing himself to Lex in Delphi.

Codex kidnapping Cassandra, deeming her a threat to his plans. 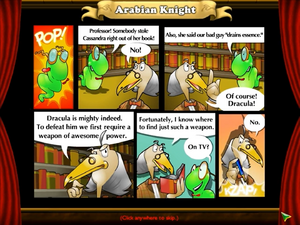 Codex framing Dracula about being the evil mastermind. 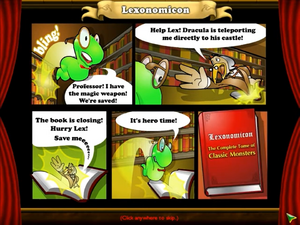 Codex fakes being kidnapped by Dracula.

Codex at Dracula's Castle, while wearing his cloak and wielding his Magic Pen.

Codex (as the final boss) facing off against Lex in the Great Library.

Codex's evil grin and mental breakdown after Lex beats him, intending on obliterating him and unleashing a bigger monster army.

Lex defeating Codex once and for all by trapping him in his own Magic Pen.
Add a photo to this gallery

Retrieved from "https://villains.fandom.com/wiki/Professor_Codex?oldid=4265189"
Community content is available under CC-BY-SA unless otherwise noted.