Taking over the world (failed)

Hegemonic Archenemy
Professor Dementor is a supervillain and mad scientist in Kim Possible, who seeks to dominate the world. He is a sort of foil to Dr. Drakken, as they share the same villainy style, only Dementor seems to be more infamous and successful.

Dementor has something of a Napoleon complex, and is quick to anger. He generally follows a pattern of gloating, followed by exasperation, with a course of ranting to follow. He has an over-the-top Germanic accent. He wears a distinctive black helmeted mask, brown trousers, and a red coat.

Little has been revealed of Dementor's past or origin. He was apparently well-known as a supervillain before Drakken became an evildoer; a running gag from the earlier seasons has others confuse Drakken for Dementor, much to the former's chagrin.

He was voiced by Patton Oswalt, who also plays him for the 2019 live action film of the same name and Ed, The Exterminator from Mighty Med.

Professor Dementor is a better mad scientist and villain than Drakken, and is also capable of stealing devices for his own needs. His henchmen are of superior quality as well. Kim generally has to work hard to foil Dementor.

As a mad scientist, Dementor is capable of creating evil technology like destructive laser weapons, a teleportation device, molecular adhesive and erasing technology, hovercrafts, magnetic controllers, robots, doomsday devices, etc. Aside from his henchmen, Dementor also used mutant dogs and robots to fight for him.

In Dementor's first major appearance, he was established as Drakken's rival, mostly because he is more successful at villainy than Drakken with higher quality henchmen and finds time to relax in between. He has stolen a device from a facility that could open a vortex in the fabric of reality the size of the state of Nevada. Drakken tried to steal it and unintentionally activated it, but Kim managed to stop it from detonating and defeated Drakken and Dementor. Later in the series, Drakken posed as Wade to trick Kim and Ron into stealing a teleportation device and eventually its adapter from him.

His next major appearance, he steals a coffee machine from a high tech lab, but Kim and Ron try to stop him. Using his new weapon, the "Bondo Ball", he manages to escape while Kim and Ron end up being attached to the people they dislike the most. To find a cure, Kim and Bonnie go to his hideout, but get captured. It is then revealed that Professor Dementor plans to use a Counter-Electrodynamic Concentrator to steal electricity from the world and force everyone to pay him in order to use it. Things seemed hopeless, but Ron managed to break into his hideout and fused him to his mutant guard dogs.

After the movie "So the Drama", Dementor tried to break into another top secret lab using an ultrasonic drill. Kim easily bests Dementor with her new battle suit, but escapes by putting Ron in peril. Seeing the power it possesses, he plans to claim it for himself. He later manages to lure Kim and Ron into a trap he set to get data on the suit (so he could control it later) and the three of them escape. He returns to control the suit which Ron was wearing to cheat at football and the two battle. Ron wins the fight, and Dementor takes and wears the suit, but was beaten by Rufus, who used his own controls to stop him.

His final major role took place near the end of the series. He sent his henchmen (including his brother-in-law Myron) to kidnap Kim and force her to reveal the battlesuit's location. This mission failed and her cousin Larry was caught instead. The two team up to steal the suit, but by the end of the episode, it turns out that Larry tricked Dementor so he could have a great birthday. Larry used the suit and defeated Dementor for the last time.

Dementor's final appearance was a minor cameo in the credits in the last episode. He is seen with Drakken in a café made exclusively for villains where he mocks Drakken for saving the world and pointing out he was more successful as a hero than a villain. When Drakken wanted to change the subject, Dementor questioned how his skin turned blue. Drakken started to explain saying it happened on a tuesday before the credits ended. 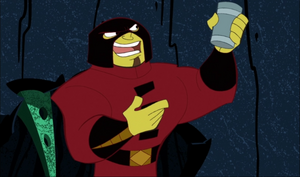 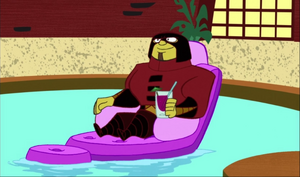 Professor Dementor relaxes by the pool.
Add a photo to this gallery

Retrieved from "https://villains.fandom.com/wiki/Professor_Dementor?oldid=4216264"
Community content is available under CC-BY-SA unless otherwise noted.