Wielding syringes and blow up weapons

Professor Dordum is a major antagonist in Rebooting The Madness and its sequel. He is a scientist affiliated with a group of agents who conducts experiments that cause his subjects to mutate.

When Edgar GunsForHands attacked the facility, Dordum went to take him out, incapacitating him with his blow-up hammer. Seeing that Edgar had blinded an elite agent, Dordum gave him a pair specs and stabbed him with a syringe, which would ultimately cause the agent to mutate into the Freak Plant.

Later, Dordum conducted an experiment on another agent that transformed him into the Crab Beast.

When Greenshades broke into the facility and freed Edgar, Dordum went to confront his former prisoner, attempting to shoot him with an AK-74. However, Edgar was able to shoot and injure Dordum, forcing him to retreat.

Dordum later found Greenshades and transformed one of his weapons into a syringe which he stabbed him with before teleporting away.

Dordum attempted to attack Edgar as he was trying to escape, but Edgar shot him first. This didn't bring Dordum down, and he attacked Edgar again outside the facility. However, Edgar defeated him with his laser-vision.

Despite this, Dordum somehow managed to recover and he attacked Edgar as he was searching the ruins of the facility, knocking him into a group of agents with green glasses.

Since Rebooting The Madness 3 has not been released, we do not know Dordum's fate. 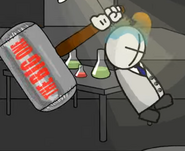 Dordum with his blow-up hammer

Dordum with his BopEm Sockers
Add a photo to this gallery

Retrieved from "https://villains.fandom.com/wiki/Professor_Dordum?oldid=3544086"
Community content is available under CC-BY-SA unless otherwise noted.