Humiliate and defeat Leslie in a car race from New York to Paris (failed).

Professor Fate is the main antagonist in the 1965 slapstick comedy film The Great Race. He is portrayed as a clever and scheming, but incompetent and cliché villain (hence his stereotypical appearance). He takes part in the "New York to Paris" race which ends in draw.

He was portrayed by the late Jack Lemmon.

Professor Fate works as a daredevil but lives in the shadow of the much more famous and successful "Great Leslie" (Tony Curtis). Fate's stunts always backfire on him and he often attempts to sabotage Leslie's stunts. Sadly they always backfire on him as well. When Fate finds out Leslie will be competing in a long distance car race from New York to Paris, he enters quickly to prove his superiority.

He and his assistant Max build a high powered car, called the Hannibal Twin-8. It has a smokescreen, cannon and can even lift the passengers high above the wheels. While testing the car, Max presses the fire button, causing the garage to collapse. After repairing the garage, while eating Maggie Dubois sneaks into his house and is chased by dogs. Fate and Max goes to the garage, with Max warning Fate, the alarm will set off if the door opens in one inch.

However Maggie and the dogs unexpectedly enter the garage, causing the alarm to goes off and locks every windows and doors preventing them from leaving the garage. Maggie, Fate and Max are then chased around the car by the dogs, with Maggie taking shelter on Fate's car, while Fate and Max climbs on the barred door while trying to make the dogs go away. During the chaos Maggie accidentally fires the car's cannon when one of the dogs attempted to climb on the window of the car to attack her, making the garage to collapse again presumably killing the dogs and Fate and Max kicking Maggie out in the process.

To gain less competition in the race, Fate ordered Max to sabotage the other cars that would be competing in the race with the exception of Leslie's car and Maggie Dobois' car. Cars 2, 3, 4 and 6 all suffered accidents when the race began. Max accidentally sabotaged his own car but he and Fate quickly repaired it.

Fate and Max arrived in Boracho Texas first, but rejected being the town's guest of honor and the fact they wouldn't get any gas until the next day. Instead, when Leslie arrived with Maggie (her car had broken down, disqualifying her from the race), he and Max infiltrated the party disguised as citizens. Fate learned of a gun-slinger named Texas Jack and decided to use him to kill Leslie. Jack arrived before Fate could get to him and soon the whole saloon was in a fistfight. Fate used this distraction to steal the gas he needed and burn Leslie's gas causing Leslie and the townspeople to put out the fire where the gas was. (Leslie later caught up) As they escaped he and Max almost collided with a train.

As Fate and Max arrived in Alaska, they were caught in a blizzard and were driven out of their car by a polar bear. They were forced to stay inside Leslie's car. During the night, they drifted afloat on a ice raft. Fate repeatedly fell of it during their travels. Eventually they arrived in Assia, where they find Hezekiah Leslie's mechanic who was being handcuffed in the train at Grommett by Maggie Dubois.

After making it through Asia, Russia, and arriving in Carpania, Baron Rolf Stuppe kidnaps Fate and uses him to pose as a prince (also played by Lemmon) so that he can rule Carpania. Leslie help Fate escape and the largest pie fight in movie history ensues while Prince Hapnick banishes his general for involving in Stuppe's plot.

Fate and Max made it to Paris, but got lost when they drove down steps. Eventually they made it to the finish line at the Eiffel Tower just as Leslie stops his car right in front of it to prove his love to Maggie than winning the race. Fate won the race by default, but was outraged when the crowd did not cheer for him and by the fact he had not humiliated Leslie and the race becomes a draw. Fate challenged Leslie to another race back home to New York and Leslie orders him to get off the hood. Leslie and Maggie married and accepted Fate's challenge. As Leslie took an early lead, Max tried to shoot Leslie with the car's cannon, instead he blew up the Eiffel Tower causing it to collapse presumably killing him and Max and allowing Leslie to win the rematch by default. 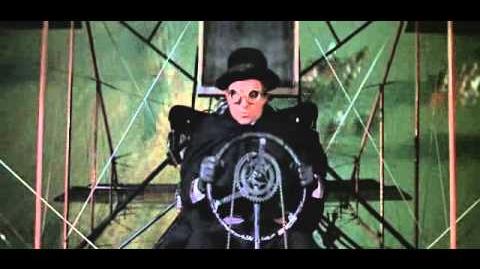 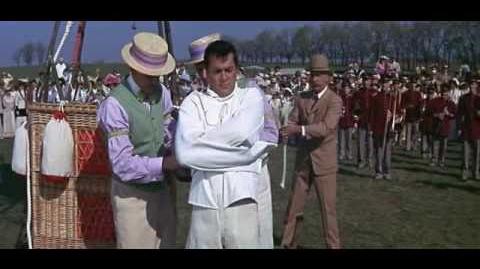 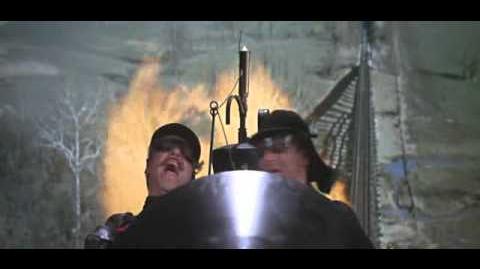 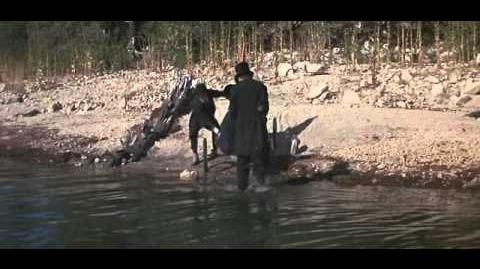 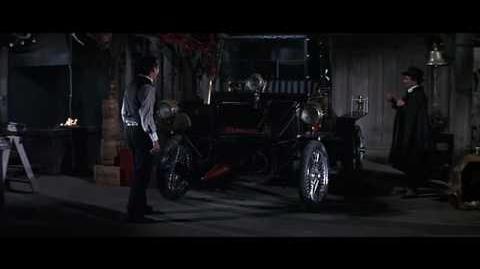 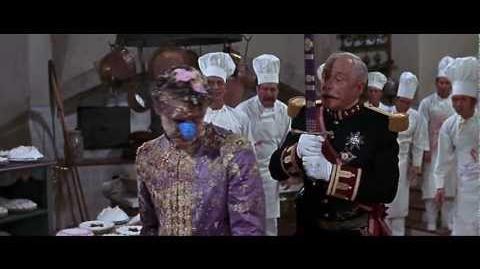 The Great Pie Fight
Add a photo to this gallery
Retrieved from "https://villains.fandom.com/wiki/Professor_Fate?oldid=4337839"
Community content is available under CC-BY-SA unless otherwise noted.