Villains Wiki
Register
Don't have an account?
Sign In
Advertisement
in: Posthumous, Doctors and Scientists, Elderly,
and 48 more

Spending time with his granddaughter Maria.

Professor Gerald Robotnik is the posthumous overarching antagonist of the Sonic the Hedgehog franchise.

Gerald was a brilliant, but tragic scientist who once used his great intellect for good, but then plotted to destroy humanity as revenge for the death of his beloved granddaughter, Maria. He is the one who created the Biolizard, and one of the co-creators (alongside Black Doom) of Shadow the Hedgehog, both of whom attempted to complete Gerald's revenge on his behalf until the latter redeemed himself. He is also the grandfather of Dr. Ivo "Eggman" Robotnik, and the indirect cause of his turn to villainy.

He was voiced by the late Chikao Ōtsuka in the Japanese versions of the games, and in the English versions by Marc Biagi in Sonic Adventure 2 and Mike Pollock in Shadow the Hedgehog.

Long ago, Gerald Robotnik was a respected researcher, considered by many to be one of the greatest scientific minds in the world. At the personal request of the president, he was offered a position onboard the Space Colony ARK by the United Federation, who wished to create "The Ultimate Lifeform", a being that could live forever. The military hoped to use the discovery of an "immortality formula" for weapons research, but Gerald refused the offer, believing that they were crossing the moral boundaries of nature. However, upon discovering that his beloved granddaughter, Maria Robotnik, was terminally ill, he changed his mind and accepted the position, in the hopes that he could use the research to discover a cure for her disease. Many researchers did not believe the creation of the "Ultimate Lifeform" to be possible and named it project 'Project Shadow' due to its apparently unreachable goal, as well as the level of secrecy the project required. Gerald apparently liked the name, and it stuck.

Professor Robotnik initially experimented on the legendary Chaos Emeralds and researched the results of applying Chaos Energy to living beings. The experiments proved successful and resulted in the creation of the Chaos Drives, which were used by the military as a power source for their robots. He also learned about the history of the Knuckles Clan and the destructive water being, Chaos. Fascinated by the legends, he created the Artificial Chaos series and even built the ARK's core like a shrine similar to the one on Angel Island in order to fully harness the power of the emeralds.

Progressing on the next stage of Project Shadow, Gerald began experimenting on lizards, due to their ability to regenerate limbs. The result was the prototype Biolizard. Initially showing all desired traits as it matured, the prototype required a life support system fueled by Chaos Drives in order to survive, and it lacked to strength to even walk, despite the strength in its tail and neck. Possessing the mind of a primitive animal, the Biolizard became more unruly and difficult to control as it continued growing. With no other choice, Gerald had to encapsulate the creature.

Later, Gerald also came across an ancient robot called a Gizoid and took it to the ARK, where it eventually went on a rampage that destroyed most of the space colony. After failing to destroy it, Gerald decided to program the robot with a "soul" similar to Maria's, so that it could become more than just a weapon.

Following his recent failures, Professor Robotnik came at a roadblock in his research. However, he somehow came into contact with Black Doom, the supreme leader of a malevolent alien race known as the Black Arms, which inhabited the Black Comet that passes Earth every fifty years. Sensing Gerald's desperation to complete his research, Black Doom agreed to help him in his next attempt to create the ultimate lifeform, and in return, Gerald promised Doom that their creation would bring him all the Chaos Emeralds in the next five decades, despite not knowing what the alien lord would want with them. Using Black Doom's blood, Gerald was able to create a far more advanced being than the Biolizard: an anthropomorphic black hedgehog with red markings (the same colors as the Black Arms), whom the professor named after the project which resulted in his birth and considered a rousing success. Upon his birth, "Shadow" became like a son to him and a good friend to his granddaughter. He even aided them in containing a crisis where the Artificial Chaos series went on a rampage.

Sometime later, Gerald realized that Black Doom wanted the Chaos Emeralds in order to teleport the Black Comet into Earth's atmosphere to release a paralyzing neurotoxin on the planet's inhabitants, allowing the Black Arms to feed off them. Thus, Professor Robotnik secretly developed the Eclipse Cannon, a weapon powered by the Chaos Emeralds to be used to destroy the Black Comet the next time it visited Earth. Knowing that the government planned to shut down his research for his involvement with the Black Arms, as well as the destructive events caused by the Biolizard and the Gizoid, he also left a video for Shadow, instructing him to use the cannon to save the world.

As Gerald predicted, the government concluded that his experiments were far too dangerous for humanity, and sent G.U.N. to the ARK to neutralize them and everyone involved. Gerald managed to survive, but was immediately captured by the government and sent to Prison Island, where he was forced to continue his experiments under their control. The government then used him as a scapegoat, publicly declaring that the ARK had been shut down due to a devastating lab accident he had caused. G.U.N. later managed to retrieve Shadow's capsule, which was ejected from the ARK by Maria just before being shot by a G.U.N. soldier and sent him to Gerald.

When he discovered Maria's name among the casualties of the raid, Gerald was then stricken with grief over how his own research claimed the life of his beloved granddaughter, despite the fact that it was meant to save her. Losing all sanity as well as his will to live, Gerald began to lose control over his thoughts, with his mind being filled with ideas on how to destroy everything, which terrified him. These thoughts eventually consumed him and he became obsessed with exacting revenge on humanity for betraying him and his family. Scribbling calculations on the walls of his cell, he secretly created a program that would take control of the ARK and send it on a collision course with the Earth and destroy the planet once all the seven Chaos Emeralds were inserted into the Eclipse Cannon. He even altered Shadow's memories to make him believe that Maria's dying wish was a request for revenge, when in fact she wanted him to forgive and protect humanity.

The government feared that Gerald would soon retaliate and had him executed, but allowed the mad scientist to leave one final recording, in which he explained his plan for revenge.

Though Gerald's name fell into disgrace, his grandson, Ivo Robotnik, looked up to his grandfather as a hero and desired to emulate him by becoming a scientist himself. However, instead of using his genius to benefit mankind as Gerald did, he instead used it to become a supervillain and conquer the world (likely out of revenge for the government branding Gerald as a madman), though all of his attempts led to failure thanks to the interference of the fast-traveling hero, Sonic the Hedgehog.

Revenge from the Past

50 years after the tragedy aboard the ARK, Ivo Robotnik, now rechristened as "Dr. Eggman" by his mortal foe, somehow learned about Project Shadow and how the government sealed it away out of fear. Curious to see what his grandfather created, Eggman stormed Prison Island, where he found and awakened Shadow the Hedgehog from his cold slumber. Still reprogrammed by Gerald to seek revenge on humanity, Shadow instructed Eggman to meet him on the Space Colony ARK, where he introduced Gerald's descendant to the Eclipse Cannon, which Eggman planned to use to conquer the world. Their plot was joined by Rouge the Bat, a master jewel-thief who was also a government agent sent to spy on the evil doctor. When Sonic was arrested by G.U.N. for Shadow's crimes, he was taken to Prison Island and locked in the same cell that Gerald once was. This cell had many scribblings on its walls about Gerald's reprogramming of the ARK, which were noticed by Amy Rose when she broke Sonic out of prison.

Upon Eggman inserting the last Chaos Emerald into the Eclipse Cannon, Gerald's program finally activated, taking control of the ARK and hiding the Emeralds deep within it. Gerald's final recording was also broadcasted around the world, explaining his plan for revenge to all its inhabitants. However, Gerald's plan was opposed by Sonic, Eggman, and Rouge, as well as Tails the Fox and Knuckles the Echidna, by using Master Emerald to negate the power of the Chaos Emeralds. Upon remembering that Maria truly wanted for humanity, Shadow also helped by fighting off the Biolizard, which was programmed to guard the emeralds. When the Biolizard attempted to finish what Professor Gerald started by attaching itself to the ARK, Sonic and Shadow fought it off in their super forms, and then used Chaos Control to place the ARK back into orbit, thus foiling Gerald's revenge completely.

Despite failing to get revenge on humanity for the death of Maria, Professor Gerald's plan to save it from the Black Arms did not end in such a way.

When the Black Comet returned to Earth 50 years after its last visit, the Black Arms launched a full-scale invasion of Earth. At the beginning of said invasion, Black Doom contacts Shadow, who currently had no memories of his past, to fulfill Professor Gerald's end of their bargain by collecting the Chaos Emeralds for him. Shadow, desiring the answers to his origins, decides to obey Doom for the time being. During his hunt for the Emeralds, Shadow was hounded by G.U.N. under orders by the Commander, who holds both Shadow and Gerald responsible for the deaths of Maria and everyone-else aboard the ARK because of their ties with the evil aliens ravaging the planet.

When Black Doom finally acquired the Chaos Emeralds and initiated his plan to devour the Earth's populace, Shadow attempts to stop him but was stopped by Doom's mind control. However, thanks to the meddling of Team Chaotix, he and the rest of the world see the recording of Gerald explaining the true purpose of the Eclipse Cannon and his desire for Shadow to defeat the Black Arms, which gives him the strength to resist Black Doom's control. After Super Shadow defeats Devil Doom and uses the Eclipse Cannon to destroy the Black Comet, both the Commander and the President admit that they were wrong about Professor Gerald, and decide to honor his memory by working toward a better future for humanity. Aboard the ARK, Shadow holds a picture of Gerald and Maria before tossing it aside, showing that he had finally put his past behind him.

Prof. Gerald Robotnik also makes an appearance as the true antagonist in the Shadow Saga in the animated TV series Sonic X. His story is very similar to the story in Sonic Adventure 2, but with some differences. Some differences include; being unclear if Gerald Robotnik came in contact with Black Doom to create Shadow the Hedgehog. 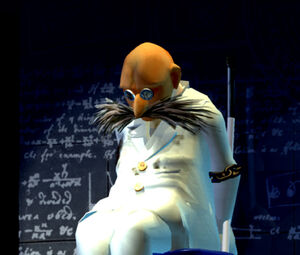 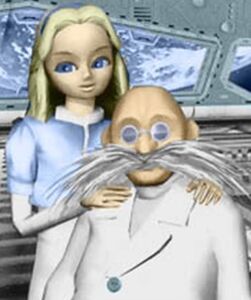 A photo of Gerald Robotnik with his granddaughter, Maria, in Sonic Adventure 2. 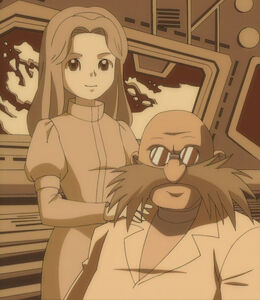 Gerald and Maria in Sonic X. 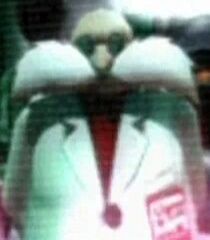 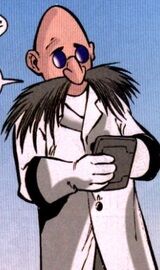 Professor Gerald in the Archie comics. 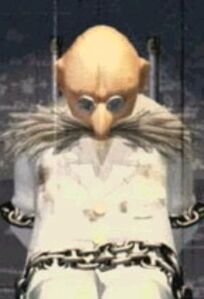 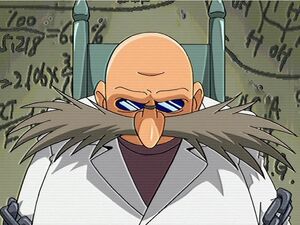