Destroy Kikaider and conquer the world.

Professor Gill is the main antagonist of the 1970's manga Android Kikaider by Shotaro Ishinomori, as well as its tokusatsu and anime adaptations.

He is the leader of a powerful criminal organization called DARK which creates animal-themed killer robots called Destructoids. He plans to conquer the world by using the Destructoids originally created with the help of Prof. Komyoji and a gigantic robot called the Giant Devil (also known as Armageddon Lord). He was once a colleague of Prof. Komyoji and persuaded him to design Destructoids for DARK under the belief they would be used for benevolent purposes. When Komyoji realized the truth however, Gill had his daughter Mitsuko abducted in order to force Komyoji to continue working for him.

After being fatally wounded at the end of the Kikaider series, a group of surviving DARK scientists transfer his brain inside Hakaider's body, thus becoming Gill-Hakaider.

In the original Android Kikaider series, he was portrayed by Mitsuo Ando, who also played the Black Cross Führer in Himitsu Sentai Gorenger. As Gill-Hakaider in Kikaider 01, he was voiced by Shozo Iizuka, who also voiced many other Toku villains including Fuhrer Hell Saturn, Demon King Psycho and many others.

As leader of the DARK organization, Gill kidnapped Dr. Komyoji and forced him to build robots for the evil organization. However, the doctor secretly retaliated by designing his latest project, a human android named "Jiro" to be good and to fight against DARK as the android hero Kikaider. Upon discovering Komyoji's treachery, Gill sent his Android Men to kill the scientist and his daughter Mitsuko, but Jiro fought them off and escaped with Mitsuko. Komyoji escaped as well, albeit with amnesia.

Komyoji was later recaptured by DARK. As Jiro continued to interfere in DARK's schemes involving their Destructoids, Gill completed another android Komyoji had begun work on but never finished - Hakaider, the "younger brother" of Kikaider, whom Gill equipped with the brain of Dr. Komyoji. Upon his awakening, Gill told Hakaider his only purpose was to kill Kikaider, but Hakaider took his directive too literally and refused to follow any of Professor Gill's other orders, occasionally thwarting the schemes of DARK's Destructoids when they got in the way of his battle with Kikaider.

After Kikaider was destroyed by Red Mine Toad, who was in turn destroyed by Hakaider, Hakaider, believing his life was meaningless now that his target, Kikaider, was destroyed, decided to turn his rage on his creator and went to kill Professor Gill. As he was strangling Gill however, Gill told him that he was not the one who created him and that the one he should be blaming was Dr. Komyoji, whose brainless body was in the cell block of DARK's base. After Hakaider left to go kill Komyoji, Gill summoned his strongest Destructoid, White Bone Flying Squirrel, and tasked it with eliminating both Kikaider and Hakaider.

White Bone Flying Squirrel successfully took out Hakaider, enabling Mitsuko to transfer her father's brain back into his body. However, the three members of the Komyoji family were later captured by Professor Gill and his Android Men, who had them tied to crosses so they could be executed. Before they could be killed however, Jiro showed up to rescue them. After Jiro freed Mitsuko, Masaru and Dr. Komyoji, White Bone Flying Squirrel showed up to battle him but Jiro became Kikaider and was able to destroy it. Jiro then chased down Professor Gill who, realizing there was no escape, self-destructs his base in a final attempt to kill Jiro, only for Jiro and the Komyojis to make it out alive, while an injured Gill seemingly is crushed in the destruction of his base. His mind however, was later transferred into the body of Hakaider, allowing him to live on as the next incarnation of Hakaider.

In Kikaider 01, Gill's brain was implanted into a new incarnation of Hakaider, leading a team of color-themed Hakaiders called the Hakaider Force. The other Hakaiders were the DARK scientists who transferred Gill's brain in the original Hakaider's body. They plane to kidnap Gill's son Akira because he has the plans for the Giant Devil robot tattooed on his back (in the anime the purpose of Akira was being the living battery for the Giant Devil).

After the destruction of the Hakaider Force, Hakaider is forced to become a member of a new evil organization called SHADOW. The spirit of Professor Gill was later called upon by Hakaider and SHADOW to provide them with information related to his children so they could complete the Giant Devil robot he had developed plans for.

In pretty much all versions of the story, Gill is a tall, middle-aged man with long black or grey hair wearing a black gown. He has always with him a large bat-shaped cane which also functions as a high-pitched flute which he uses to control his robots. His brain is later transferred into Hakaider's body.

Gill is a megalomaniacal, cold and cruel. Manipulating and using others, both robots and humans, to fullfil his ambitions, including his former assistant Prof. Komyioji or his own children Akira and Rumi. He is very arrogant, believing no one can stand up to him and takes advantage of people and robot's weaknesses to ensure nothing goes wrong for him.

Despite his hatred for Jiro/Kikaider, he often tells Jiro when playing his flute, that since Jiro was born from DARK, he should return to their side.

In the 1970's live action series, Gill is depicted as more wrathful and unstable than his manga and anime counterparts. 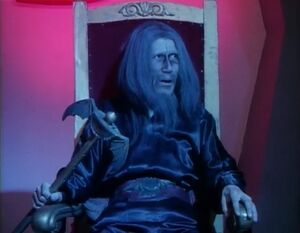 Gill seated in his chair. 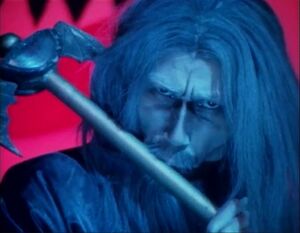 Gill playing his flute to take control of Kikaider. 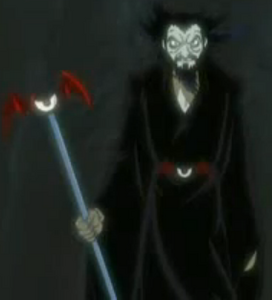 Gill as he appears in Kikaider: The Animation.
Add a photo to this gallery

Retrieved from "https://villains.fandom.com/wiki/Professor_Gill?oldid=4346576"
Community content is available under CC-BY-SA unless otherwise noted.