Villains Wiki
Register
Don't have an account?
Sign In
Advertisement
in: Doctors and Scientists, Magic, Cartoon Villains,
and 25 more

Get his hat back from Frosty (failed).

Professor Hinkle, also simply known as Hinkle, is the main antagonist of the 1969 Christmas television special Frosty the Snowman.

He was voiced by the late Billy De Wolfe.

On the day before Christmas, the protagonist named Karen and her friends' teacher decided to bring in the magician Professor Hinkle to do magic tricks. However, Professor Hinkle is really bad at performing magic tricks and accidentally breaks two eggs onto the floor. Soon later, school is dismissed for winter break, and a gust of chilly wind carries Professor Hinkle's magic hat and the hat lands on the children's snowman named Frosty, who comes to life, saying "Happy birthday!".

Professor Hinkle snatches the hat away from the snowman, pretending that he did not see the snowman come to life. After walking a long distance, his white rabbit by the name of Hocus Pocus tricks Professor Hinkle, by quickly snatching his hat, and replacing it with a wreath. Hocus returns it to Frosty, who comes back to life again. However, Frosty is very distressed at how warm the climate is where they are, so one of the children recommends that he goes to the north pole. Karen wants to come with Frosty, so she does.

They go to the train station and hitch a ride on a refrigerated train going to the north pole. Unfortunately, Professor Hinkle has realized by now that Hocus is a traitor, and he sees Frosty and Karen get onto the train, and he hitches a ride as well, telling himself to think nasty while laughing.

Karen is freezing inside the boxcar, so Frosty makes the decision to leave the boxcar. Professor Hinkle sees that they have outsmarted and replied "Oh, you tricked me! No fair!" and leaves the train too, but as a result, he ends up falling down the mountain, crashes into a tree, and a squirrel laughs at him.

Frosty asks Hocus to tell the animals living in the forest to make a fire for Karen, as he is fearful that in the harsh climate of the north pole, she will not be able to survive and feels that it is best to take her home. Hocus then suggests to get help from Santa Claus, but Frosty claims credit in the end, much to Hocus's dismay.

Hinkle comes running and begins to maliciously extinguish Karen's fire until Frosty comes to her aid and tells him to stop. Hinkle demands Frosty to hand over the hat, and then unsuccessfully tries to take the hat by force.

Frosty and Karen have no choice but to flee. Since Frosty is made out of snow, he performs a belly whopping slide and goes much faster on the snow, than Professor Hinkle does.

At the bottom of the hill, Frosty and Karen encounter a greenhouse, much to Frosty's relief. Karen can now stay inside the greenhouse, while Santa Claus is coming. Despite Karen's objections, Frosty also comes into the greenhouse, saying that he could lose a few pounds.

Soon an exhausted Professor Hinkle, finally having caught up to them, slams the greenhouse door shut, trapping Frosty and Karen, and laughing evilly as knowing that he has finally caught Frosty. Santa Claus arrives, but it is too late for Frosty, because he sadly melted to a puddle, and looks as if Hinkle had killed him.

It is unfortunate that Karen weeps for the death of Frosty, but Santa Claus comforts and explains to her that since Frosty is made out of Christmas snow, he can never melt away completely. Santa opens the Greenhouse door and revives Frosty back into his snowman form. Professor Hinkle angrily demands his hat one last time or else. Only does he stop, when Santa confronts him for his greed and threatens to permanently put him on the naughty list, so this makes Professor Hinkle feel guilty. Santa gives Professor Hinkle another chance to go home and write "I'm sorry for what I did to Frosty" a hundred zillion times. And maybe just maybe Santa will give him a new top hat.

It is shown in the credits that Professor Hinkle is now redeemed and walking proudly with his new top hat. Hinkle waves goodbye to Frosty as he and Santa depart.

Professor Hinkle is a cunning, fraudulent, manipulative and egotistical magician who is hired to perform at the school's Christmas party. The narrator describes him as the worst magician in the world, as shown when his equipment falls and whose tricks go awry, he puts eggs into his magic hat, which all fall on the floor, and he fails to pull his playful and mischievous pet rabbit named Hocus Pocus out of the hat. He also has a tendency to repeat adjectives and adverbs when excited or stressed, such as "Messy, messy, messy!", "Silly, silly, silly!", and "Busy, busy, busy!". Despite his villainy, he eventually turned out to be a good guy without any negative qualities. Professor Hinkle he is wearing a green tuxedo suit with pink dress shirt with black bow tie and green vest, and white gloves, with green top hat with black band around with brim, Green pants and black shoes with white spats. 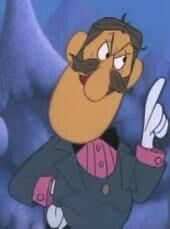 Professor Hinkle demanding for his hat.

Professor Hinkle bidding farewell to Frosty and Santa Claus with his hat. 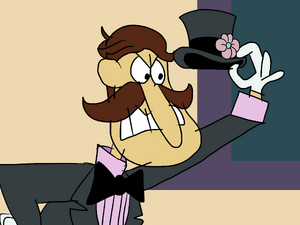 Where is that rabbit!