Make students lose their faith in God to turn them into misotheists just like him (failed).

Professor Jeffrey Radisson is the villain protagonist of the 2014 Christian drama film God's Not Dead.

He was portrayed by Kevin Sorbo, who also played Hercules in God of War III.

Radisson was born an only child, and his father was implied to have died of an unknown cause according to a letter left from his mother. Once a God-loving Christian, Radisson's life changed at the age of twelve when his mother was dying of cancer, and despite his prayers, his mother died, leaving him alone. Ever since, he has hated God for taking everything from him and repressed His existence by telling everyone that he's an atheist (despite being more agnostic at best).

Radisson eventually became a philosophy professor. At some point, he fell in love with one of his students, Mina Shelley, a few years before the events of the film. They were live-in boyfriend and girlfriend in the movie.

In November 2012, Radisson forces his new students to write "God is dead" with their signature on a piece of paper. One student, Josh Wheaton, is a Christian and can't do it. Radisson then requires Josh to speak from the podium during the last twenty minutes of the next three classes to prove God's existence, with the rest of the class acting as the jury. He attempts to make Josh mess up, but during the last session, he's pressured by Josh into revealing why he hates God; he says that God took everything from him, revealing that he even knows God exists. The other students now get to choose whether or not God is dead, beginning with Chinese student Martin Yip, everyone rises in unison and says "God is not dead". Radisson sees Josh's actions and leaves the classroom in defeat.

During this time, Radisson has been verbally abusing Mina for being a Christian, so she leaves him. That night, after the third and final session, Radisson finds the note left by his mother before she died. His mother asks him to forgive God for taking her away from his life and to happily live on without her. Moved by the letter, he wants to make amends with Mina, whom he deduces is at a Newsboys concert at Hastings Center. While crossing the street, a car hits Radisson and drives off. At that same time, two pastors, Reverend Dave, and an out-of-town minister go to help Radisson. The out-of-town minister says that Radisson's ribs have been crushed and his lungs are filling with blood, meaning he will die soon. Dave says to Radisson that the car could've killed him instantly, but God has given him a second chance to believe in Jesus. Radisson redeems himself and announces he gives his life to the Lord before dying. Because he accepted Jesus as savior before his death, he finally resides in Heaven with his mother, having received eternal life by God.

God's Not Dead: A Light in Darkness

Due to his death, Radisson isn't shown in the film in person, but he is mentioned by Josh Wheaton when confronting Reverend Dave, revealing that after taking on Radisson, he gave up going to law school so he could focus on being a campus minister. 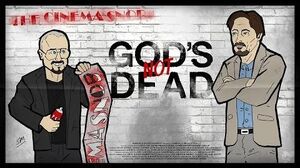 The Cinema Snob GOD'S NOT DEAD