Teaching students at a university.

Become a god by wiping out humanity.

Rape Lucy to create a new race (both failed).

Professor Kakuzawa is a major antagonist in the manga and anime series Elfen Lied. He was a scientist for Diclonius Research Institute, as well as the son of the company's director, Director Kakuzawa. He also was friends and colleague with Kurama and a professor at a university. Being the son to the director, he shared the same goals as his father, and likely the rest of his family.

He was voiced by Hiroaki Hirata in the Japanese dubbed and John Swasey in the English dubbed version of the anime.

A professor of biology at Kamakura's 'safety school' university (roughly the equivalent of an American Community College), he was the son of series' mastermind Director Kakuzawa and a colleague and former friend of Doctor Kurama, as well as once being Kurama's predecessor as head of Japan's Diclonius Research Institute. It was also he who recruited Kurama, his college roommate, to join the Institute, publicly dedicated to learning the origin of the outbreak of girls born with horns, called Diclonius, and controlling or eradicating them. When he saw that the younger Kakuzawa ran the place like a torture chamber for these very young girls, Kurama quickly regretted falling for his slick lines. Arguably, Kakuzawa saved Kurama's life when he was cornered by Silpelit Diclonius Number 3, who had played possum with her developing abilities and wanted to meet Kurama, the only member of the staff to ever express any outrage over her treatment. Oddly, Number 3 may have been less interested in killing Kurama than infecting him with the Diclonius birth virus, something no one realized at the time. Whatever her intent, Kakuzawa shot and killed her from behind.

He was often a cruel man, not merely to the girls in his charge, who could be called dangerous, but to people like Kurama's assistant Oomori, whom he taunted about the upcoming birth of his child, who in fact was born Diclonius, as was Kurama's daughter Mariko. Kurama made a deal with the Kakuzawas not to euthanize Mariko, as was the rule at that time, and continued to work with his colleague, though their friendship was now strained. When both noted how the birth of Diclonius girls coincided with record amounts of deaths from heart failure in Kamakura, the two worked together and discovered the existence of the Diclonius Queen, a young girl named Kaede, whom they located and captured. It was then and there Kaede was renamed Lucy after a fossil said to be the genetic mother of humankind (older fossils have since been found). Kurama thought that this would put an end to the outbreak, which threatened to replace Humans with Diclonius, but as he himself took over the Institute, the plans of the Kakuzawas were only beginning.

Leaving the institute and setting up shop at the university, Professor Kakuzawa gained an unsavory reputation among staff and students. He maintained his main research lab in a basement office, where he searched for a way to immunize Human males against the virus that caused their children to be born with horns. But his aim, like his father's, was much more Pro-Diclonius than anyone realized. He hired an assistant, a Doctor Arakawa, who found herself treated more like a go-fer than an assistant. In class, the Professor frequently insulted his students.

Three years after Lucy's capture, Professor Kakuzawa laid down a plan to enable her escape. Like his father, he not only had no intention of eradicating the Diclonius species, he believed that his family was Diclonius, albeit an older strain who had lost their powers in mating with ordinary Humans. Like all known members of his family, he had been born with small vestigial horns atop his head, a mark of his supposed heritage. To the Kakuzawas, Lucy was the messiah, and mating with her and siring her children would make the father God of the new species. Though his plans to enable Lucy's escape were successful, she all but vanished after her escape, something no one thought her capable of, given her appearance and violent nature. Presumably, he used his connections to follow any efforts to recapture her.

When the special forces operative Bando was maimed in battle with the briefly surfaced Lucy, he was taken by Kurama's assistant Isobe to see Professor Kakuzawa, who outraged Bando with the idea of siring Diclonius children in exchange for not being sterilized. It was at about this same time that Kurama learned of the family's true agenda towards Lucy, forcing him to finally rebel and seek aid to stop their plans.

Professor Kakuzawa's fate changed when two of his students, Kouta and Yuka, brought along a friend to class they called Nyu. Nyu was a girl rendered infantile by a head wound, and the two had no choice but to bring her to school with them, while trying to keep her quiet and draw no attention. Nyu wore large hair ribbons that were strategically placed. Despite this and her personality, Kakuzawa immediately recognized her as Lucy, but made the mistake of thinking that Nyu was an act that Lucy was putting on to disguise herself.

Thinking quickly, he lied to Kouta and Yuka, telling them that Nyu was his brother's daughter, and threatened them with prosecution for kidnapping and unlawful imprisonment for not reporting her to the police. Reluctantly and painfully, the two left Nyu in her supposed uncle's custody, with her wailing Kouta's name as they left. Kakuzawa then tied up and stripped Nyu, intending to rape her in the basement lab, also thwarting his father's desire to do the exact same thing. The sedative instead awoke the Lucy personality, who the Professor attempted to bargain with, calling theirs a natural alliance. Lucy disagreed, found him unnecessary and cut off his head.

His remains were found by Doctor Arakawa and Kouta, who had come back when the Professor's story about Nyu had fallen under doubt. Arakawa urged Kouta to forget what he had seen, while she took the Professor's remains back to the island facility run by his father, who seemed to show disdain for his eldest son. Arakawa was pressed into becoming the Chief's new assistant, and secretly used the Professor's research to make the Diclonius vaccine herself. While the Professor had merely intended it as a bargaining chip to control the Diclonius once they started to rise, Arakawa used it to save the world and make herself famous at the expense of the man who had treated her as a go-fer. The Professor's remains were buried in an underground grotto beneath the island facility, as it had been for many generations of his ancestors. Though his father planned more thoroughly, his attempted alliance with Lucy met the same fate, with Lucy revealing that the Kakuzawas were merely Humans with a scalp mutation, not Diclonius like her. 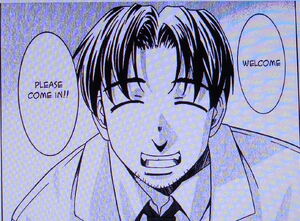 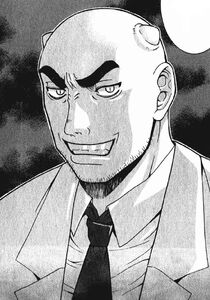 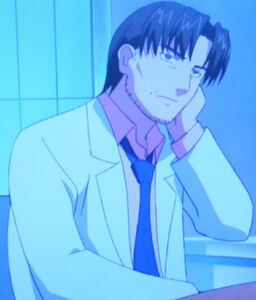