Professor MacDougal is the main antagonist of the Mighty Max season 1 episode "Werewolves of Dunneglen".

She was voiced by Miriam Flynn.

One night at Dunneglen, Scotland, a grave keeper was brutally murdered by a three headed werewolf. Shortly after, Max gets instructions from Virgil via videotape to head to a portal that will take him to Dunneglen. After arriving, Max talks to a constable on the whereabouts of Virgil and Norman. The constable says that they were arrested as suspects, and that the grave keeper was the "fifth kill this week". Professor MacDougal shows up, saying that she analyzed the bite marks on the body, and made a plaster cast of teeth that look like they're from a werewolf. She asks the constable to let them go, but she really shows concern for a young man named Cameron getting incarcerated. Max sees Cameron in his cell, calling for help, but the constable pulls him away and takes him to his house for food and a room.

One night, Max saw a werewolf through the window of his room, and the constable was alerted that Cameron is no longer in his jail cell. Max noticed that the tracks that walked out weren't human. He followed the tracks to Dunneglen Castle, and saw the werewolf up there transform back into Cameron. Immediately, Max thought he was the killer werewolf. In a panic, Max lost his way back to jail, and noticed Professor MacDougal's laboratory. MacDougal lets him in when he said that Cameron was the killer werewolf, but she said "At last," like she obtained something. On his way to finding a phone, Max stumbles into a room full of werewolves that looked like they were in an unpleasant situation. MacDougal told him that she was trying to find a vaccine for rabies. She said that there are no such thing as werewolves, but Max did not know what to believe.

He told her that Cameron is in the castle. She says that they have to save him before the constable gets him. She sends Max outside and says that she'll be right behind him. Shortly after, Max was ambushed by the three headed werewolf. On the run for his life, Max runs to the top of Dunneglen Castle, where he noticed Cameron, thinking how he got there so fast. Max slipped on the crumbling moorings, and Cameron saved him from falling to his death. Cameron reveals to Max that he's immortal, can change from wolf to man at will, and has protected Dunneglen for ages. He says that a new beast has been hunting him.

That beast turns out to be the three headed werewolf. The werewolf chases Max and Cameron in the castle. Max has an idea to bait the werewolf. He and Cameron climb the ruins, and the werewolf follows, but the ruins giveaway for too much weight. Max and Cameron jump on the chandelier, leaving the werewolf to possibly be crushed underneath the debris. Cameron reveals that he had a pack with him, and stated that they were the werewolf's victims, and Max told him that they're back at Professor MacDougal's laboratory. He calls the constable on where to pick up the killer. By the time the constable arrived at Dunneglen Castle, he was knocked out with a brick by Professor MacDougal, who was the three headed werewolf the whole time.

Max and Cameron arrive at MacDougal's lab, and discover that what she was really doing was draining their blood away, barely keeping them alive. MacDougal, in the constable's clothes, discovers them both and locks the door. She tells them that she's been making a serum, claiming that she has the very key to immortality itself. Preparing to kill them both, she gleefully refers to Max and Cameron as "breakfast", and drinks the serum, transforming into the three headed werewolf. Cameron transforms to fight MacDougal, and Max tries to back away the weakened pack, but to no avail. Max noticed some hydrogen tanks and sparks from a Tesla coil, knowing that this will trigger an explosion. He empties the gas from the tanks, but the pack were getting mauled. Max noticed an adjustable ceiling crank, and used it to pin down MacDougal. Max and the werewolf pack made it out of the lab, while MacDougal is pinned down, getting killed in the explosion.

Professor MacDougal seemed like she cared for the well being of Cameron when he was arrested, but that was all a facade, as she knows all about the werewolves being immortal, and she has been extracting their blood, barely keeping them alive. She drinks the serum to transform into a three headed werewolf, and is fully aware of her killings, using her monster werewolf form to kill innocent people, and become an immortal scourge of the Highlands. She also has no qualms with killing a 10-year-old boy in Max, while she gleefully refers him as "breakfast". 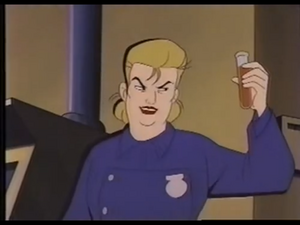 "Here’s to the kill, or should I say, breakfast! 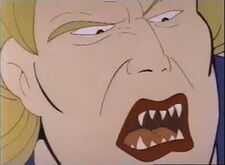 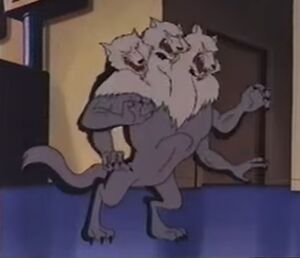 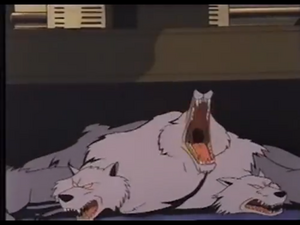 MacDougal moments before her death.
Add a photo to this gallery

Retrieved from "https://villains.fandom.com/wiki/Professor_MacDougal?oldid=3775472"
Community content is available under CC-BY-SA unless otherwise noted.