Leader of the Iron Cross Army

Professor Monster (in Japanese: 教授モンスター) is the leader of the Iron Cross Army and the main antagonist in the Japanese Toei Spider-Man TV Series (1978-1979). He is the one who destroyed Planet Spider (惑星のクモ) and the arch-nemesis of Takuya Yamashiro (山城 拓也), who transforms into Spider-Man (クモ男) to fight his Machine Bem monsters.

He is portrayed by Mitsuo Ando, who is well known for playing Tokusatsu villains such as Professor Gill, Führer Geisel, Black Cross Führer and Strategist Reider.

Professor and Amazoness would come up with different plans to kill Spider-Man and humanity, but Takuya thwarted each of the Iron Cross Army's schemes as Spider-Man, leading Professor Monster to become more concerned with destroying him. Professor Monster would later send Amazoness to steal two mummified corpses of amazons found in the Brazilian rainforest and performed an operation to revive them so they could serve in the Iron Cross Army, providing further muscle to their campaign. After performing the operation, Professor Monster had Amazoness take the amazons, Bella and Rita, to a secluded area for them to awaken and acclimate. 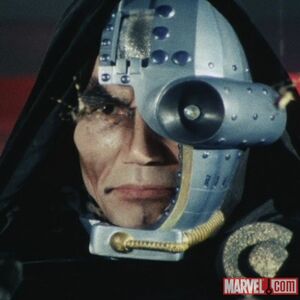