To get revenge on Doofenshmirtz for filling his role as Peter the Panda's archnemesis (failed).

Professor Mystery is the main antagonist of the Phineas and Ferb episode "Lost in Danville". He is a local mad scientist in Seattle and the assigned nemesis of O.W.C.A. Agent Peter the Panda.

He was voiced by Terry O'Quinn.

Professor Mystery is the son of the local Seattle couple Denise and Bernie, who were obsessed in containing a black hole that they discovered, but they disappeared for some unknown reason, leaving Mystery to fend for himself in Seattle. Because of this event, he went into a life of evil and being a mad scientist in general. This also led the O.W.C.A. to assign Peter the Panda as his nemesis. However, despite their rivalry, it turns out that both Mystery and Peter had a fall-out because of Mystery's lack of communication, even refusing to tell Peter about his tragic upbringing as he puts it, "Mystery is my allure".

Upon learning that the local Danville mad scientist Heinz Doofenshmirtz used to fill in the role as Peter's temporary nemesis, Mystery felt angry and decided to get rid of Doofenshmirtz, though it was more likely in order to get Peter's attention so that he can go back being Peter's nemesis. To that end, Mystery heads over to Danville and infiltrates into Doofenshmirtz Evil Incorporated, where he spots Doofenshmirtz doing his computer blog (which is sponsored by L.O.V.E.M.U.F.F.I.N.). Mystery blindfolded him and ate a sandwich that Doofenshmirtz was saving for lunch before heading back to his lair in Seattle. After placing Doof in a capsule, he revealed himself to the latter, assuming that he knows about him, but Doofenshmirtz stated that he doesn't since Peter doesn't talk. As Mystery transported Doofenshmirtz into a different room, Doofenshmirtz learned about Mystery's lack of communication with Peter and tried to convince him into talking to Peter to set things right.

However, sticking to his "mystery" comment, Professor Mystery refuses to listen and intends to finish Doofenshmirtz off with an unnamed -inator that he created. However, catching wind of the situation, Peter arrived to battle Mystery, and Doofenshmirtz forced him to explain what the -inator does. Having no choice, Mystery finally confessed that it's an Unexistinator, designed to erase anything from existence, which has left Doofenshmirtz horrified as he is about to be erased from existence. Fortunately, Doofenshmirtz's nemesis Perry the Platypus arrived to rescue Doofenshmirtz by pointing the inator up into the ceiling before it fired. The ray went through the roof and bounced off the Space Needle all the way to Danville, where it hits a capsule that actually contained the same black hole that Denise and Bernie were trying to contain. Because of this, the capsule was erased from existence along with the black hole, thus the world was safe again.

Despite his plan being foiled, Mystery is still relieved that he finally got Peter's attention. They both head over to a coffee shop, where Mystery explains his backstory to Peter, and finally sees how much the communication is worth it. Around the same time, Bernie and Denise have arrived, recognizing Mystery as their long-lost son. Delighted to see that his parents are alive, Mystery embraces them in a hug before introducing them to Peter. Declaring that their work is done, Doofenshmirtz and Perry (who were both watching this from outside) happily head back to Danville in peace. 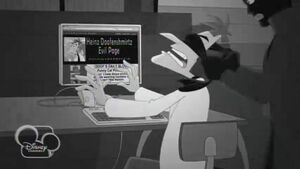 Mystery kidnapping Doofenshmirtz in his building. 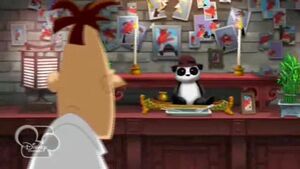 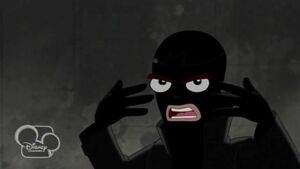 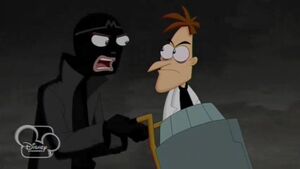 Mystery revealing that he is Peter's nemesis. 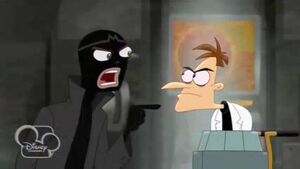 Mystery accuses Doofenshmirtz for 'stealing' Peter away from him. 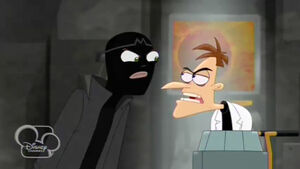 Doofenshmirtz angrily responded that Mystery himself is to blame for his failed rivalry with Peter. 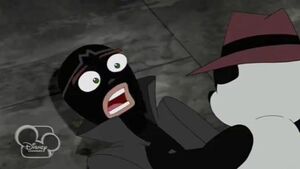 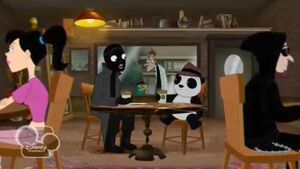 Mystery and Peter finally getting into a communication in a coffee shop while Doof and Perry are watching. 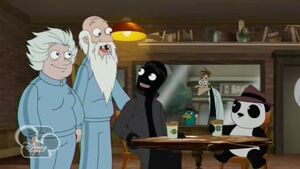 Mystery's parents (Bernie and Denise) arrive to reunite with him, resolving his backstory.