Defiler of Flesh (by Azrael)

Ringmaster of the Circus of Strange

Singing opera.
Killing those who are too "imperfect".

Making people "perfect".
Gain his mother's approval.
Make Batman "perfect" or kill him in order to preventing him stop his work (all failed).

Lazlo Valentin, better known as Professor Pyg, is a minor antagonist in Batman: Arkham Knight. He appears as the main antagonist of the Most Wanted mission "The Perfect Crime". He is the insane leader of the Circus of Strange and is responsible for several kidnappings in the places where the circus performed. Pyg experimented on his abductees and turned them into mindless puppets known as Dollotrons. However, Pyg only changed those he deemed "perfect"; the others he killed and displayed throughout Gotham City for Batman to find.

He is voiced by Dwight Schultz, who also voiced Graven in Conan, Circus Trainer in Avatar: The Last Airbender, Aloysius Animo in Ben 10, Danny Darrow in Scooby-Doo! Mystery Incorporated, Charon and Helios in God of War: Chains of Olympus, General Wilhelm Strasse in Wolfenstein: The New Order, Lester Van Luster in The Powerpuff Girls, Vulture in Marvel's Spider-Man, and many others.

Lazlo Valentin was obsessed with making himself and people "perfect" after being berated by his parents that he wasn't "perfect" or "wasn't good enough" to please them. As an adult, he was a gifted scientist, but after suffering a schizophrenic breakdown believed that people must have their uniqueness removed if they are to be perfect the way he envisions it. Taking up the deranged persona of Professor Pyg, he became the ringmaster of the Circus of Strange, where he would tour the country, luring victims of all ages to his show, and surgically turning them into his Dollotrons, "perfecting" them as he sees it.

The end results are organic robots with doll masks grafted on their faces, genitals presumably removed and unable to feel or think anything. Those he could not "fix" were simply tossed like trash. Eventually, he conceived a son, Janosz; it's implied that he was born from a rape victim and Pyg had her either killed or turned into a Dollotron when she refused to be with him. At one point, Pyg turned the young son of a rich man named O'Neil into a Dollotron, and when O'Neil brought a suitcase of money to release him, Pyg refused to let the boy go and had his Dollotrons, including O'Neil's son, capture him and prep him for surgery.

Batman finds six victims strung up like a dressed deer in various places throughout Gotham with opera music playing on a loop through speakers placed next to the bodies. Because the process of turning them into Dollotrons had corrupted their DNA and destroyed their fingerprints, Batman has to use his Deep Tissue Scanner to look for any distinguishing features to identify them in the Missing Persons Reports.

After investigating the bodies, all the victims had similar traits: they had troubled pasts, had been through surgery prior to being kidnapped, had scars on them from accidents, genetic deformities and they all went missing at fairgrounds and parks around the country; all of which were where the Circus of Strange had stopped on its route. Alfred finds only one associated name involved with the circus: Lazlo Valentin, who leased a beauty salon in Gotham, the Pretty Dolls Parlor, but the lease expired before construction began on Wayne International Plaza. He also tells Batman to proceed with caution with Valentin, because he was mentally unstable, even by Gotham standards.

Pyg is interrupted in one of his experiments by Batman, who demands that he release all of his prisoners from his Monster Machine. Pyg refuses and turns his Dollotrons upon Batman before joining in the fight, throwing knives at Batman while singing crazy song lines as the Opera music plays on. After Batman defeats them he arrests Pyg and takes him to the GCPD Lock-up, all the while Pyg bemoans how his mother will be very disappointed in him. 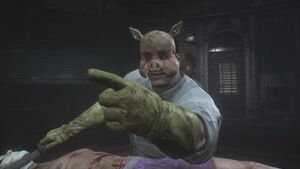 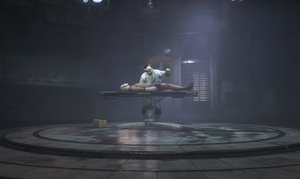 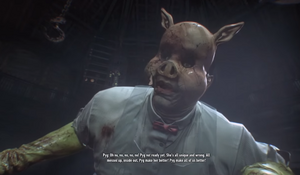 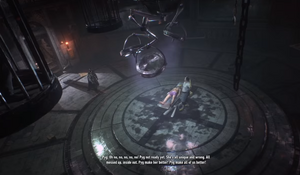 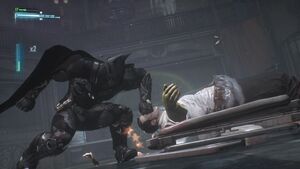 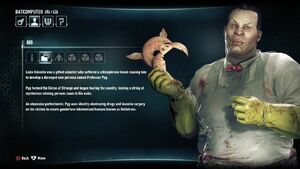 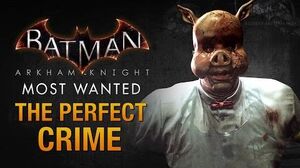 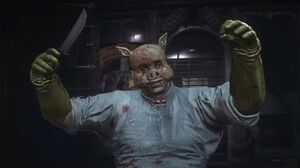