Villains Wiki
Register
Don't have an account?
Sign In
Advertisement
in: Affably Evil, Partners in Crime, Batman Villains,
and 49 more

Avenge the animals
Make an animal army (all failed)

Professor Pyg and Mr. Toad are recurring antagonists of the TV show "Beware the Batman". They are eco-terrorists who want to take back the world for the animals and hunt anyone who does them wrong. Their crimes often involve rhymes as clues.

The first episode they are in is the first episode of the series "Hunted". They are seen in an old-fashioned car chasing down the billionaire "Simon Stagg". Simon is eventually tranquilized by Pyg and the two of them go to him while he's on the ground. Pyg checks his heartbeat and says his cholesterol isn't that good. Simon asks why they are doing this and they explain that it's because of what he's done to animal kind. The next scene shows a news broadcast showing a video of Pyg and Toad making an announcement of their arrival in Gotham City. The camera shows Simon's head on a stand medallion but he is still alive. They give their message in a rhyme with a hidden meaning. Batman and Alfred Pennyworth look into it more and it's revealed that they are after billionaires that were involved in a land deal that destroyed a forest. Batman scans the video and it shows their next target who is "Michael Holt". The next scene shows Michael Holt being chased by Pyg and Toad. A few seconds later, Batman comes in his batmobile to end the chase. They notice this and try to kill Batman. Later, they shoot a cannon from their car, causing Batman to crash along with Holt. Toad seems excited about that huge chase and goes to the batmobile. Toad is sad to know Batman is gone. However, Pyg assures him that they can always kill him another time. So, they kidnap Holt. It's revealed Batman got out of the car and he gets a call from Alfred. Batman tells him that Pyg and Toad got Holt. During the phone call, Alfred is knocked out by Toad. Pyg says that it's not Bruce, but the butler. Toad says he was sure it was Bruce, to which Pyg responds by saying that he should have gotten his eyes checked. Toad notices someone on the phone and Pyg sees Bruce Wayne's name on the phone. Pyg threatens Bruce that he will be captured soon and ends the call by dropping the phone and smashing it with his foot. Batman goes back to the batcave and realizes that Bruce Wayne was indeed intended to be kidnapped. The next scene shows Micheal, Alfred and Simon chained up. Pyg explains to all of them that they will be hunted like the animals they took the forest from. Pyg gets mad at Simon when he states that the land was purchased legally, saying that because of the destruction it was not legal. Pyg and Toad tell them to start the obstacles. Batman gets there and goes into the building. Michael, Alfred and Simon realize how dangerous the place is. Alfred insists that they fight back. While Batman is in there, parts of the building fall apart. There's a small explosion along with a small cage trap that falls, causing Michael, Alfred and Simon to go flying. Alfred's ankle is broken and Pyg suggests that they cut it off. Alfred tells Michael and Simon to run away. However, Toad uses his sonic scream, leading Michael and Simon to get trapped in a big cage. Toad attempts to attack Alfred when Batman stops him and temporarily takes them both down. Batman tells the three men to get out of the building when he deals with Pyg and Toad. He gets Alfred to free Michael and Simon and they get out of the building. Batman fights Pyg and Toad. However, they escape by putting bombs in the building and running away. Batman gets out and the three men survive as well. Batman however, says that Pyg and Toad will be back.

They return in the eleventh episode "Instinct", where they are first seen going after a fashion model named "Azzura '' who is wearing bird feathers and calling her out for it. Pyg finally asks if she would like to know what it's like to be a bird who can't fly, causing her to scream. Bruce and Tatsu Yamashiro (his sidekick Katana) are having dinner when a commotion is heard. Azzura is seen hanging by a big clock. The clock strikes where she is hanging and she falls. Batman comes and stops her from falling. On her, a paper with the words ``out for the dame" is found. After that, Pyg and Toad are seen enjoying tea and biscuits on the rooftop. Batman and Katana find out that it's from the nursery rhyme "Baa Baa Black Sheep ''. The rest of the rhyme's words have clues as to where they are headed. The next scene shows Pyg and Toad breaking into a fashion designer's home and saying that he is going to be punished for his crimes against animal kind due to him using animal fur on his clothes. Toad sets some of the place on fire and Pyg traps him with a net gun. Pyg is upset that he is still breathing. Batman and Katana get to the place and discover the fashion designer with a fox mask tied up near moving razors. They stop the razors and untie him. Batman says his name is "Liam Taylor''. Underneath the fox mask, a logo for "Cole Plastics" is seen. Batman goes there and looks around. He is ambushed by Pyg and Toad and a fight happens. Pyg gives Batman an electric shock but Batman eventually throws him to the ground. Behind Batman's back, Toad uses his sonic screech to put him into a shelf with it falling on him. Pyg allows him to finish the job but they are forced to flee due to the police being close. Batman gets out of the building and tells Katana what happened. The two of them get to a truck with the words "Pat O'Dygs BBQ Bomb". However, other words appear, "Pyg tO'D Bomb" as realize what this means and discover bombs inside the truck. They succeed in getting the bombs out. Later, Bruce and Tatsu sit down and discuss what happened. They look at an invitation for a fashion party. They figure out that Pyg and Toad plan to blow up the ship where the party is taking place. Batman tracks down Pyg and Toad and they reveal everything. They end up fighting and Batman is trapped with a substance coming from one of Pyg's weapons. Eventually Katana comes in and helps Batman fight Pyg and Toad. They attempt to throw bombs, but Katana throws them causing them to fall and for parts of the ship to come apart. The bomb is defused and Pyg and Toad are arrested.

In the fourteenth episode "Darkness", Pyg and Toad are set free by Ra's al Ghul along with the criminals Magpie, Phosphorus Rex, Cypher and Tobias Whale. In the fifteenth episode, "Reckoning", Ra's Al Ghul asks for help to deal with Batman but everyone laughs with Pyg and Toad saying it's his problem. Ra's Al Ghul strikes Toad, angering Pyg. Pyg attempts to attack Ra's Al Ghul but is held back by Tobias Whale. Ra's Al Ghul continues and promises that whoever kills Batman will get their own piece of the city to rule. Later, Pyg and Toad attack Batman but they eventually crash their car after a chase. After, Pyg and Toad along with the other villains go after Batman and slowly begin to fight each other to get him. Pyg slices Cypher's cables with Toad using his sonic screech on Phosphorus Rex. Toad attempts to get Batman but is hurt by Magpie. Magpie eventually gets into a fight with Pyg. The fight ends up with Magpie throwing Pyg to the ground.

Their last appearance is in the twentieth episode "Doppelganger", where they are first seen fighting Katana. Eventually, Katana is beaten and Pyg and Toad get away. Later in the episode, Bruce Wayne is attacked by a giant bat. Later, Batman and Katana are attacked by the bat with Pyg and Toad telling them to give it back. It's name is revealed to be "Man-Bat". Eventually, the cops get to the scene and Toad uses his sonic screech to take care of them. The giant bat is taken to the batcave where he is revealed to be named "Dr. Kirk Langstrum". He explains that he was creating a life saving serum made from a bat's immune system. However, Pyg and Toad break into the lab, steal the substance and force Kirk to test the serum on himself. It turns him into a giant bat and he flies away. He reveals that he was under Pyg and Toads control and that they plan to create an animal army with the serum. It is revealed that they have victims and that the experiments are at the Gotham Zoo. Pyg tells Toad to choose a woman he would like to marry and have turned into a toad. Toad chooses one and proposes to her, causing her to scream in terror. Batman, Katana and Man-Bat get to the Gotham Zoo and get to the place where the experiments are happening. Batman deals with Pyg and Toad while Katana and Man-Bat get the test subjects out. Pyg gets Toad to get the test subjects while he fights Batman. The hostages are safe but Toad gets control of Man-Bat. He tells Man-Bat to take Katana for the experiment as he plans to make her his bride. Batman manages to beat Pyg but is snatched by Man-Bat. Pyg gets up and Toad walks in with Katana in his arms. Batman succeeds in getting the capsules that control Man-Bat off his neck. The next scene is Toad and Katana's wedding. When Pyg is about to give the final word, Batman puts capsules into their necks and tells them to sit down. They obey and are eventually arrested. Katana is also thankful that she didn't marry Toad and Man-Bat thanks the both of them for helping him.

Professor Pyg is a tall and mildly obese, bald, British man. He wears a pig mask and a three-piece purple suit with a white dress shirt and purple tie. He also wears black shoes and white gloves.

Mr. Toad is a short green humanoid frog with yellow eyes with red pupils. He wears a brown golf cap, matching sweater and pants, and a light brown vest. Underneath, he wears a white dress shirt and brown tie. He also wears no shoes. 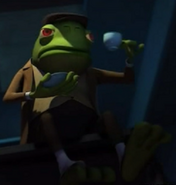