To rule all of Mousedom and kill his arch-enemy Basil

Professor Padraic Ratigan is the main antagonist of Disney's 1986 animated film The Great Mouse Detective. He is the arch-nemesis of the famous mouse detective, Basil of Baker Street, and is also the world's greatest criminal mind who plotted to be the first as supreme ruler of all Mousedom.

He was voiced by the late horror actor Vincent Price.

As Basil's arch-enemy, he possesses many of the characteristics of the classic, evil genius, diabolical villain. He is based on Professor Moriarty from the Sherlock Holmes stories. He is incredibly extravagant in his clothing and his lair, which is filled with champagne, jewels, and luxurious furniture. He is charismatic and very sophisticated, with his black suit, cravat, and cigarette holder, and is absolutely appalled when he is called a rat. Believing he is much better and more intelligent than common rats, he has anyone who calls him a rat suffer their fate. However, during the climatic scene in the Big Ben clock tower, he sheds his pristine clothes and begins snarling and scratching with sharpened claws and thrashing his tail, revealing the true animal within that he tried so hard to disguise.

In the film, Ratigan is planning upon his next diabolical plan: to use a robot to replace the Queen of England and then have the robot programmed to name him supreme ruler of all Mousedom during the Queen's Diamond Jubilee at Buckingham Palace. To start off, he gets his bat henchman Fidget to kidnap the local mouse toymaker Hiram Flaversham. Ratigan then forces Mr. Flaversham into building the robot for him by threatening to have his daughter Olivia kidnapped and being killed if Hiram refuses to cooperate. He ensures that his henchmen do what he wants by threatening to have them eaten by his cat Felicia if they displease him in any way.

After Fidget manages to kidnap Olivia and keep her contained inside a bottle, Ratigan is very impressed that Fidget has gotten the supplies they need for the plan; such as the royal guard uniforms for the henchmen and the tools and gears needed for the robot's modifications. However, he is angry to learn that Fidget lost the list he wrote, and that Basil was chasing Fidget during Olivia's capture. Knowing that any mouse of Basil's caliber can use the list to track down to his lair, Ratigan attempts to have Fidget fed to Felicia, but later changes his mind when he realizes that he can use this opportunity to trap Basil. As planned, Ratigan awaited for Basil's arrival along with his newly associate David Q. Dawson. After having himself and his henchmen to surprise Basil and Dawson with a welcoming celebration, Ratigan mocks Basil for falling into his trap, and his men start to laugh, causing Basil to sink into depression, much to Dawson's dismay.

Ratigan then had his men to have Basil and Dawson tied to a mouse-trap, planning to have them killed by using a Rude-Goldberg contraption: Ratigan will play a record, and as the song plays, the phonograph arm will tighten up a rope, which will release a tiny ball that will set off the mouse trap and trigger a gun, a crossbow, an axe, and a giant anvil that will totally destroy the two. Ratigan then leaves for Buckingham Palace, where Fidget and his henchmen kidnap the Queen and attempt to have her fed to Felicia. During the ceremony, Flaversham (at gunpoint) controls the robot into introducing Ratigan to the mice as her new consort, much to their shock. Ratigan then proceeds to announce his tyrannical rules to his 'subjects', such as proposing a heavy tax policy against the elderly, the disabled, and little children. However, the queen robot starts to rebel against him, much to his embarrassment; it turns out that Basil managed to break himself and Dawson free from the death trap and they head onward to Buckingham Palace (with the help from Shelock Holmes' pet dog Toby), where they managed to rescue the Queen and tie up several of Ratigan's men. Controlling the robot, Basil denounces Ratigan as a fraud and traitor before revealing himself to Ratigan.

With his plan exposed, Ratigan is now being trampled by Basil and his friends while the rest of Ratigan's men are pummeled down by the angry civilians. However, Fidget manages to break free and take Olivia hostage, allowing himself and Ratigan to escape on a hot air blimp over London. During their getaway, however, they are pursued by Basil, Dawson, and Flaversham on a makeshift balloon. Ratigan steers his blimp while Fidget pedals the propeller, and tries to outrun them. Fidget almost succeeds but the extra weight is too much for him, so he tells Ratigan that they have to "lighten the load". Ratigan agrees with him, but rather than throwing Olivia off (as he still needs her as a hostage), he instead betrays Fidget by throwing him off, resulting Fidget (who can't fly) to fall into the Thames River below. Ratigan pedals the blimp himself, but Basil leaps onto Ratigan's blimp to fight him. However, with no helmsman, Ratigan is unable to steer his craft and it crashes into Big Ben. Inside the clock tower Ratigan tries to ambush Basil, but fails and Basil traps Ratigan by throwing his cape in the gears and escapes with Olivia.

It is then that Ratigan, out of sheer bad temper, finally breaks free of the gears, tearing his clothes (including his shoes) in the process, and transforming from a very formal, composed rat to a highly savage one. He pursues Basil with great speed and leaps into him, and they both fall onto the clock's hour hand. Finally, Ratigan extends his long and strong claws and begins slashing Basil, wounding him. He manages to knock Basil off the hand, but Basil grabs onto the wreckage of the blimp. It was then Basil reveals that he only took the blows to remind that the clock bell will strike at 10:00, having pickpocketed Ratigan's tiny bell to prove his point. Ratigan realizes this too late as the minute hand strikes at 12, and the clock bell tolls, causing Ratigan to plunge off off the hour hand screaming. As Ratigan falls, he tries to take Basil with him, but he fails and falls 278 feet into the darkness below to his death. 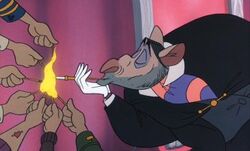 Professor Ratigan almost succeeded in becoming the king of England's Mousedom before Basil and his friends stopped him. 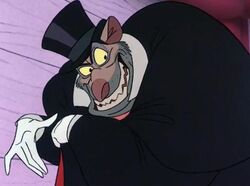 Retrieved from "https://villains.fandom.com/wiki/Professor_Ratigan?oldid=930735"
Community content is available under CC-BY-SA unless otherwise noted.