Villains Wiki
Register
Don't have an account?
Sign In
Advertisement
in: Mongers, Doctors and Scientists, Science Fantasy Villains,
and 53 more

We're Back: A Dinosaur's Story

Use the Dinosaurs as part of his Circus to scare his audience and become more famous (failed).

Professor Screweyes (also simply known as Screweyes) is the main antagonist of the 1993 animated film We're Back: A Dinosaur's Story, which is based on the 1987 children's book of the same name by Hudson Talbott. He is the evil twin brother of Captain Neweyes and the founder of a scary modern-day traveling carnival known as the Eccentric Circus (also known as Professor Screweyes' Eccentric Circus). This self-proclaimed "Master of Fear" is also the inventor of Brain Drain, a drug which has the opposite effect of the Brain Grain and it drains the intelligence of, and devolves, anyone who uses it, and of the Fright Radio, a radio-like device that is the opposite of the Wish Radio and it transmits the signal, soundwaves, and imagery of all people and creatures through nerves, chaos, paranoia, and (most of all) fear.

He was voiced by the late Kenneth Mars, who also played Vultor in The Adventures of the American Rabbit and Sweet William from Fievel's American Tails.

Screweyes' name comes from the screw that replaces his left eye. In a deleted scene, he explains that he lost his left eye as a child when he was snoozing by a berry bush, and after a berry fell upon his eye, a crow pecked for the fruit, while at the same time, taking his eye. Ever since then, Screweyes decided that the world around him never made any sense and therefore acts accordingly to life's senseless ways by using fear to get his way. Because of his incident, he had a fear of crows, and uses this as his act. This way, even while he fears the crows, they are still under his control.

In the film, the two child protagonists named Louie and Cecilia wish to join his circus not knowing the evil behind it. They eventually find it in Central Park and meet Professor Screweyes. With some manipulation, he gets the children to sign a contract in their own blood (similar to Dolores Umbridge). The dinosaurs arrive to try and save the kids, but they find out that they are too late. Screweyes is initially frightened by the dinosaurs, but when he sees that they are tame and civilized due to his brother's Brain Grain, he is delighted. He thinks that they will be the perfect attraction for his horror circus. He demonstrates his power of hypnosis and the power of his invention, the Brain Drain, on the children, and turns them into dimwitted chimpanzees.

Rex tries to threaten Screweyes to make him change the children back, but Screweyes refuses and cites that the dinosaurs are powerless to scare anything due to taking the Brain Grain. However, Screweyes makes a deal with the dinosaurs; if they take the Brain Drain and become the main attraction in his circus, he will destroy the contract and revert the children back to their normal selves. Otherwise, he'd use them as the Wild Children of Hellzapoppin to scare people as the attraction. The dinosaurs reluctantly accept his offer to sacrifice themselves for the children and are turned back into their natural wild selves.

When the children awake the next morning and see the dinosaurs, now wild again, caged and chained up behind Screweyes' stage, they form a plan to sneak into Screweyes' circus and rescue them.

After several frightening shows of realistic holograms, lights, and people in suits, Screweyes personally introduces his "main attraction". The dinosaurs are rolled in, chained up on a large cart. Screweyes orders his minions to remove to the devolved Rex's chains around his ankles and hypnotizes him to do his bidding. He orders it to take giant steps which terrifies the audience. Screweyes laughs and arrogantly claims that he has no fear, since he is the self-proclaimed "Master of Fear".

But soon after he says this, a crow flies into the control room and, presumably testing Screweyes' boast, pushes the flares button, which causes the bright lights to break Rex free of Screweyes' hypnotic control, and the devolved Rex, enraged that he has been manipulated, attacks the suddenly frightened Professor and threatens to eat him. However, Rex is stopped by Louie, who is able to revert him back to his human-like state by pleading to his true nature and non-verbally declaring that love is greater than the power of fear. This same effort reverts the rest of the dinosaurs back to their human-like states.

Screweyes is shocked and furious when the audience is not scared but happy and to see his brain drain worn off. His brother, Captain Neweyes, then arrived to take the dinosaurs and the children home. Screweyes' clown named Stubbs arrives to resign from his employ and humiliated Screweyes in the process.

Neweyes offers Screweyes a chance to come with him on his aircraft and reform, but he refuses. At that, Neweyes flies away with the dinosaurs and children.

With both the audience and act gone, Screweyes is left alone in the darkness with only the crows for company. He admits out loud that he (without anyone to frighten) is just a lonely and frightened old man with no real control of fear. And without that control, Screweyes was consumed by his own fear as the crows frenzy around him, devouring him. After the crows flew away, all that is left is the screw from his left eye. Just then the crow that both turned on the flares, and who possibly also took Screweyes' real eye when he was a child, blows away the dark spell on the screw, and takes it with him.

Professor Screweyes is an evil, greedy, arrogant, sarcastic, manipulative and treacherous ringmaster of Professor Screweyes' Eccentric Circus. He is very crafty, observant, intelligent and perspicacious, so he uses the Dinosaurs as part of his Circus to scare his audience and become more famous. One of his most iniquitous plans is when he scares his audience.

He is very stubborn, as when his brother offered him reconciliation and the chance to come with him, he refused. However, this proved to be his downfall, as being alone awoke his fear and caused his crows to devour him.

Professor Screweyes also appeared as the main antagonist and final boss of the video game adaptation of We're Back: A Dinosaur's Story on both Super Nintendo and Game Boy. 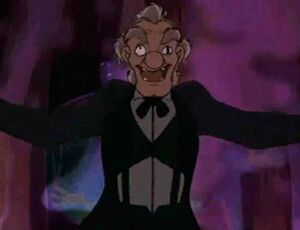 "DO YOU SEE WHAT THEY'RE MOST AFRAID OF?!" 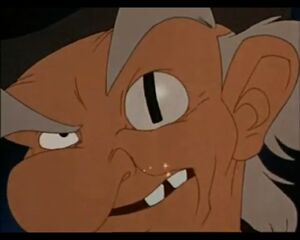 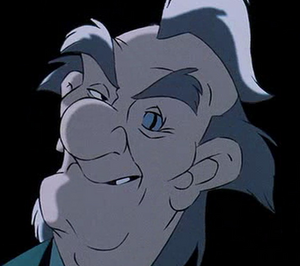 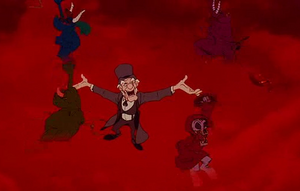 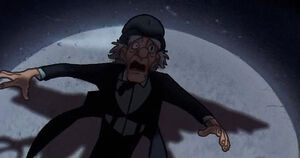 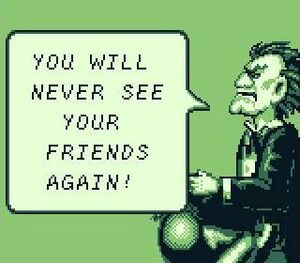 Professor Screweyes in the Game Boy version of the We're Back: A Dinosaur's Story videogame.