Professor Werner Von Brawn is a heel professional wrestler from the Simpsons episode Bart the Daredevil.

Von Brawn wrestled in the promotion, World Class Wrestling. He was billed as being from the University of Heidelberg, and he taunted the crowd by kissing his muscles. He was wrestling Rasputin the Friendly Russian in the "most anticipated match of the century" at the Springfield Performing Arts Center. Rasputin had control through most of the match, but Von Brawn beat him by hitting him over the head with a wrench while the referee's back was turned. This resulted in a chorus of boos and throwing trash from the crowd, including from Homer and his friends at Moe's Tavern and Bart and his friends at his house.

Von Brawn is also the boss from the Simpsons arcade game in Stage 1: Downtown Springfield. 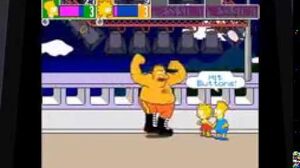