Aid Axlerod in his plot to make alternative fuel look bad in order to get rich from his huge oil rings.

Professor Otto Wolfgang Zündapp, or better known as Professor Zündapp or simply Professor Z, is the central antagonist of Pixar's 12th full-length animated feature film Cars 2. He is a wanted German weapons designer who works for Sir Miles Axlerod in the latter's plot to turn the entire world against alternative fuels and make money out of it.

He was voiced by Thomas Kretschmann, who also played Hermann Fegelein in Downfall, and Wolfgang von Strucker in the Marvel Cinematic Universe.

Professor Zündapp is considered by others to be greedy and ruthless due to his desire of making money out of selling oil, even if it means causing many car crashes during the Grand Prix races and killing others who may know of Axlerod's plot. He can also be described as a genius, as shown when he was able to create EMP weapons disguised by Prix camera to ignite the racers' fuel to start up the crashes in the first place. As with his leader Sir Miles Axlerod, he lacks any redeeming traits as he shows no remorse or even consideration regarding how his crimes will affect others. Throughout the film, he commits various acts of murder and terrorism all out of anger and greed. While he does have an excuse for his evil as he like the other members of his group got treated so poorly, he commits crimes for entirely selfish reasons. Furthermore, he and Miles show no care for each other; their partnership being merely professional.

Overall, Professor Zündapp is a greedy and heartless terrorist who shows that he will do anything for a quick buck. He never shows signs about caring about anyone but himself, and doesn't even really care about the discrimcation he faced beyond using it as an excuse to kill the others. Furthermore, since he does play a more active role when committing these henious acts, one could argue that he is even more ruthless than his leader.

Zündapp was first seen in an oil rig where he and his fellow Lemons murdered a British agent named Leland Turbo by having him crushed into a cube, much to the shock of Leland's friend Finn McMissile. Upon spotting McMissile, Zündapp orders his gang to kill him, but McMissile escapes and fakes his death.

As it turns out, Zündapp is plotting to sabotage the World Grand Prix, as he is willing to do whatever it takes to eliminate all obstacles and keep everything intact. He even got his gang to murder an American agent Red "Torque" Redline after deducing him as McMissile's contact in Tokyo, though Redline averted this by slipping classified information regarding the plot onto Mater before his death, leaving McMissile and his partner Holley Shiftwell to mistake Mater as a secret agent.

Upon realizing that Mater has got the classified info, Zündapp orders his Lemon gang to track down Mater, though the latter tags along with McMissile and Holley while learning more about the Lemon's plot to sabotage the World Grand Prix. During the second race in Porto Cosa, Mater goes undercover for the Lemons' meeting and soon learns of a horrible truth: Zündapp have created electromagnetic pulse weapons designed as Prix cameras that can ignite the alternative fuel Allinol, which may explain why many racers crashed during the first race in Tokyo. And with Allinol suspended, the world will have to resort back using oil, as the Lemons still own the largest oil reserves in the world. Following the sabotage of the second race, Zündapp receives his next order to kill Lightning McQueen (due to the latter's decision to use Allinol in the third race in London), much to Mater's shock.

Eventually, Zündapp and his gang are able to track down Mater, McMissile, and Holley before trapping them all before heading over to London. After having Grem and Acer to tie up Mater and the agents inside Big Bentley to enact the final stage of their plan, Zündapp fires up the EMP beam on McQueen during the race. However, McQueen unexpectedly escapes unscathed, as it turns out that one of McQueen's friends Sarge switched the Allinol with organic fuel to avoid such an incident, just as Mater escapes to warn Lightning McQueen. Anticipating that the attempts would fail and that Mater would escape, Zündapp implanted a bomb inside Mater's air filter in hopes that he would set it off to kill both McQueen and Mater. However, Mater uses his rocket booster to speed himself and McQueen out of range, much to Zündapp's anger.

Upon being confronted by a freed Holley and McMissile, Zündapp panics and runs off to the harbor to escape with Tony Trihull (a battleship). However, McMissile snags Zündapp with several hooks before killing Tony with several mini-bombs, allowing him to capture Zündapp. After Mater explains the events to McQueen, Zündapp was soon brought before Mater and McQueen. The captured scientist angrily questioned McQueen on why his death ray didn't kill him, something that shocked the racecar. McMissile angrily orders Zündapp to disarm the bomb, but Zündapp reveals that it can only be disarmed with a voice command by the one who activated it and that neither Mater's nor Zündapp's are a match. This was confirmed when Mater tried to deactivate it, only for the timer to start in five minutes, and when Zündapp is forced to deactivate it, it only shortens it. Realizing that Zündapp is of no use, Holley angrily tasers Zündapp before helping the others finish off the other Lemons for good.

Eventually, Mater soon realized that Axlerod is the true mastermind behind the plot and that Allinol was actually gasoline engineered to ignite as part of the plan. An outraged Mater confronted Axlerod by forcing him to deactivate the bomb to confirm his suspicions. With the plot exposed, Zündapp is presumed to be arrested along with Axlerod and the Lemons for conspiracy to commit crime, murder, and embezzlement along with various acts of terrorism and torture. 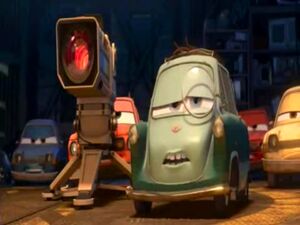 Professor Zündapp with the rest of the Lemons

"It's the American spy!!!" - Zundapp's realization. 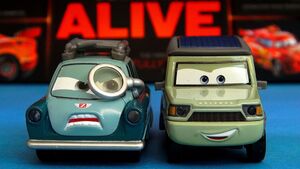 Retrieved from "https://villains.fandom.com/wiki/Professor_Z%C3%BCndapp?oldid=3741657"
Community content is available under CC-BY-SA unless otherwise noted.