Zoom
Flash's Opposite
The Reverse Flash
The Zoom Guy

Eliminate the Flash and everything he stands for even if it kills him or causes the end of the world.

Use the Get Out of Hell Free card to reach Heaven before he dies (both failed).

He is voiced by C. Thomas Howell, who also played the Reaper in Criminal Minds and Will Magnus in Justice League: Gods and Monsters.

To get Barry's attention, he hires Captain Cold, Heat Wave, Mirror Master, Top, and Captain Boomerang to break into the Flash Museum. This alerts the Flash who fights the Rogues but is eventually tied to a wall by adhesive from one of Captain Boomerang's boomerangs. While the Rogues gloat about their victory, Thawne speeds into the room and reveals himself to Barry as their employer. He reveals that he plans to destroy the museum, calling it a "shrine to Flash's ego", as well as a few city blocks close by. The Rogues are taken by surprise as this was not what they agreed on. When Captain Cold asks what Thawne is talking about as they did not bring any bombs, Thawne reveals that he secretly attached bombs to all their belts. Barry tries to reason with Thawne, stating that he does not need to kill thousands of innocents just to kill him. Thawne acknowledges that he doesn't need to but chose to do so just to make Barry's last moments more agonizing.

To save the city, Barry vibrates inside his gel-shackles to liquefy the adhesive just enough to cover Thawne in it as well. Believing that Thawne has to deactivate the bombs to prevent blowing up with them, Barry tells him that he has no other choice. Thawne, however, accepts that bringing down Barry would mean his own death. It does not come that far as the rest of the Justice League enters the building. With her Lasso of Truth, Wonder Woman tries to force Zoom to reveal how to disarm the devices but Zoom just tells them that it is impossible. The rest of the League then bring the Rogues outside the city to disarm the devices without threatening civilian lives. This leaves Barry alone with Zoom whose bomb eventually is the only one active. Barry manages to deactivate it by smashing it somehow. Zoom in then freed from the adhesive and bought to S.T.A.R. Labs by Superman. Before the two lift off, Zoom remarks on how Barry cannot save everyone, at least not those who matter.

In the alternate universe, Barry, who does not understand what happened, tries to visit Batman. When he finds out that Batman is Thomas Wayne, not Bruce Wayne, he tries to prove that he's Flash. However, his ring does not contain his Flash uniform but the uniform of Zoom. He reveals Zoom's story to Batman before joining up with him. Flash deduces that Thawne must have sped back through time and must thus have altered the history.

When Barry attempts to run fast enough to break the Time Barrier, Zoom somehow deliberately stops him from running fast enough by preventing him to harness enough of the Speed Force.

While Lois Lane is attacked in London by Amazons of Wonder Woman, Thawne takes out the attackers and saves Lois, who does not see his face because of his speed. Footage of the attack is later sent to Batman who then decides to join the new Justice League to take down Zoom, thereby allowing Barry to restore the original timeline which would mean the survival of his son Bruce. As Thawne expected, Barry and the Justice League then head to London to prevent the war between Wonder Woman and Aquaman.

During the final battle in London, Thawne reveals himself to Flash. The two battle throughout the ruined streets of London and Zoom manages to impale Flash's leg with a steel rod and then proceeds to beat him. While Flash is beaten down, Zoom reveals to him that it wasn't him who altered the timeline but Barry, who traveled back in time to save his mother. After gloating over Barry for destroying all, he mocks Barry for not saving JFK or making sure Hitler stayed in Art School but for saving his mother and causing destruction by this act of selfishness. While Barry is forced to see his allies die, Zoom starts beating him up again. He then stops once more, gloating that the so-called hero is responsible for the destruction of the world.

To prevent Thawne from harnessing the force Barry needs to go back in time, Batman shoots Thawne in the head. After his nemesis falls to the ground dead, Barry manages to speed off fast enough to restore time and this time lets his mother die as she was meant to, although this results in history still being somewhat altered.

Despite his apparent death, Zoom returns to the new timeline created by Barry Allen's correction of history. Zoom first appears in his hideout with his henchmen Silver Banshee and Blockbuster, where he has a government scientist gives him information on Steel Maxum. When the Suicide Squad tracks Maxum to a strip club in Missouri in order to get the Get Out of Hell Free card, a magical device that allows a person to bypass Hell and enter Heaven, from him, Zoom, Banshee, and Blockbuster attack them. The Squad manages to escape the club in their RV and Zoom gives chase. As they are being chased, Deadshot realizes that something is wrong with Zoom, as he is moving far too slow. Ultimately, Killer Frost slips Zoom up using her powers, and the Squad escapes.

Later on, Zoom and his minions come across Steel Maxum, who has been abandoned by the Squad and is being arrested for indecent exposure and presumably kill him and the police officer arresting him. Following Vandal Savage's escape with the card, Zoom expends himself in order to place a tracking device on his ship. While he smiles at his success in doing so, he notices a stream of blood running down from his head. As the Squad prepares to leave Utah, Zoom's henchmen kidnap Killer Frost and bring her to him. He offers Frost a spot on his team, also removing the bomb implanted in her neck, and she eagerly joins. Using the tracer feature of Frost's bomb, Zoom tries to kill the Squad by luring them into a trap and detonating the bomb, although they survive, albeit with Bronze Tiger heavily injured.

The Squad, with help from Scandal Savage, track Vandal down to his lair and are captured, before Zoom and his team arrive, defeat Vandal, and freeze the Squad. When Deadshot questions why he has become so slow, Zoom reveals the bullet hole in his head, explaining how Batman had shot him during Flashpoint, and that he used his connection to the Speed Force to expand his life at the cost of having to run slower to prevent physical strain. The dying Zoom tells that it's like operating in a fog, with everything being unreal and warped. Zoom then phases his hand into Vandal Savage's body to retrieve the card, which had been surgically attached by Professor Pyg, killing the immortal in the process.

Despite finally succeeding in getting the card, Zoom is betrayed by Killer Frost, who kills Banshee and Blockbuster, freezes him, and takes the card for herself, resulting in Amanda Waller detonating Copperhead's bomb in order to kill them both. Zoom and the remaining Squad members fight for the card, which ends with Zoom taking the card and performing lingchi on Bronze Tiger with a ceremonial dagger and nearly killing him. Deadshot points his guns at Zoom, but Zoom tells Deadshot to try and shoot him, as, regardless if he does or not, he'll die and use the card to get into Heaven. Then, using the last of his strength, Tiger throws the dagger and cuts off Zoom's fingers, making him drop the card. Deadshot immediately riddles Zoom with bullets and kills him for good, giving the card to the dying Tiger afterward.

During the Justice League's second attempt to destroy Darkseid, John Constantine sees visions of Flashpoint (including Zoom) after healing Barry Allen (who'd been captured and forced to power Apokolips by running for 2 years nonstop). It's also clarified that Barry's prior attempt to fix Flashpoint didn't fix the timeline but rather created a new one making Thawne ultimately responsible for the downfall of the new timeline (since Flashpoint's creation was indirectly prompted by Thawne's actions).

Professor Zoom is a calm, collected, stoic, sadistic, merciless, manipulative, arrogant and highly intelligent psychopath. Zoom lacks any form of morality, being completely devoid of empathy or remorse for the atrocities he commits. He rarely loses his temper, often maintaining a calm and collected composure, as well as being semi-polite to all around him. Even in defeat he only expresses subtle anger followed by taunts toward his captors. Despite this, the most defining trait of his personality is his pathological hatred of his arch-nemesis, the Flash. Thawne is more than willing to go to every possible length to kill Flash no matter what, regardless of the lives he has to end or ruin in order to do it. His hatred for Flash is so great that he is more than happy to sacrifice his own life, if it means killing him; without a second thought. Zoom would also happily sacrifice the whole planet Earth and by extension the entire universe itself if it meant killing Flash, showing that he considers revenge against the Flash to be his sole purpose in life. However, rather than kill him outright, Zoom always tries to make Flash’s death as emotionally and mentally painful as possible, showing an intense desire to make him suffer before he dies.

The only things that rival Zoom's hatred of the Flash are his arrogance and sadism. Despite the Flash being the one he hates more than anything, Thawne greatly enjoys the suffering of those who have nothing to do with his grudge as well. This is shown during his slow and painful killings of both Vandal Savage and Bronze Tiger, as well as reveling in the chaotic and destructive world war Flash’s flashpoint unintentionally caused. An even greater example is when after subduing Flash inside the Flash Museum, Zoom attempted to blow up his own henchmen along with Flash and several blocks of Central City, for no other reason than pure sadistic glee. This also shows he has no regard for those who work under him, seeing them only as disposable tools. Thawne also never considers the possibility that his plans might fail, always considering them to be fool-proof. He always underestimates his enemies, be they Flash or someone else. This arrogance and underestimation of his opponents is what leads to Zoom’s defeat at Flash’s hands every time. However, it was both his arrogance and sadism that lead to both of his deaths first at the hands of Batman (Thomas Wayne) and then Deadshot, as he wasted time both torturing his enemies and boasting about his triumph as well as disregarding injured fighters whom he did not consider threats (Batman and Bronze Tiger).

Professor Zoom shows all the traits of a true psychopath: lacking any form of empathy or remorse, possessing a high IQ, having extreme narcissism, skilled at lying and manipulation, and devoid of fear. 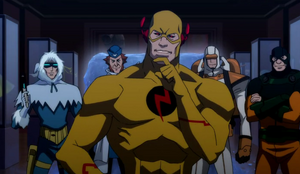 Thawne with the Rogues 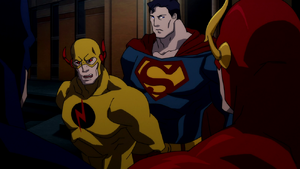 Thawne manipulates Flash while he is arrested 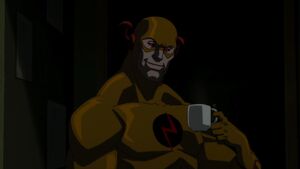 Thawne drinking a cup of coffee moments before his fight with the Flash. 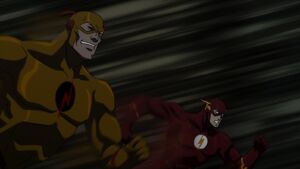 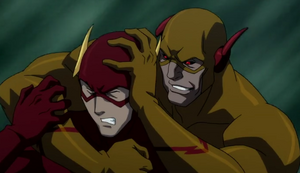 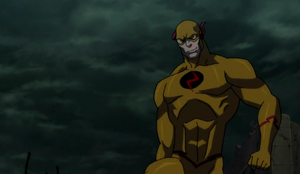 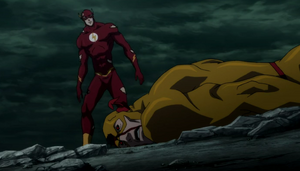 Thawne is killed by Batman 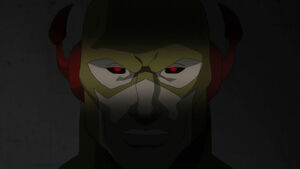 The return of Professor Zoom 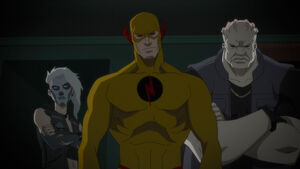 Professor Zoom and his minions 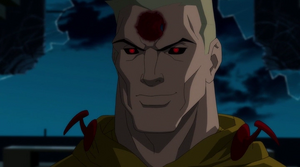 Thawne unmasked shows the hole in his head in Suicide Squad: Hell to Pay that he is still alive

Thawne revealing the large hole in his head. 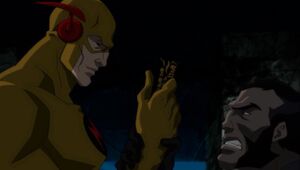 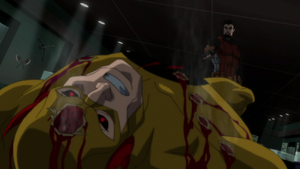 Retrieved from "https://villains.fandom.com/wiki/Professor_Zoom_(Justice_League:_The_Flashpoint_Paradox)?oldid=4287847"
Community content is available under CC-BY-SA unless otherwise noted.