Control the dragons with the use of the magical Rod of Saville.

Profion, also known as Mage Profion and Lord Profion, is the main antagonist in the 2000 action adventure fantasy film Dungeons & Dragons, based on the popular fantasy tabletop roleplaying game Dungeons & Dragons. He is an evil Mage, as well as a tyrant who greatly opposed Commoners, ordinary folks whom most, if not all, has knowledge or abilities that are related with magic. Both his and his followers' evil nature and their hatred against Commoners whom they see as slaves were the reason why some people, including protagonist Ridley, initially greatly despise Mages in the first place.

He was portrayed by Jeremy Irons, who also played Scar in The Lion King, and Simon Gruber in the Die Hard film franchise.

Much of Lord Profion's past is not explored in the film, only that he is a wicked Mage who lives in the Empire of Izmir, a medieval metropolitan land divided long ago from the Commoners, of whom Profion and the other Mages (especially mages who are his followers) look down upon. Profion seeks to rule the Empire in the iron fist as much as his predecessors, if not more, but finds an opposition in form of the wiser young empress, Savina.

Failed Experiment and Persuading the Councils

In a bid to outperform Savina upon learing that she gained the possession of a scepter that enables her to control gold dragons only known as Scepter of Izmir, Profion creates a staff of his own which supposedly able to replicate the same feat. After giving the staff a finishing touch with appropriate amount of dragon magic, he decides to test it on a captured dragon within his castle. However, the staff fails as soon as the captive dragon breaks free from its control, prompting him to kill it in frustration and subsequently allowing its blood to set the sewers aflame, attracting the attention of baffled citizens.

Not wanting to be deterred by such failure, Profion improvises by holding a meeting with the Councils of Izmir to discuss the controversial views of Empress Savina, who wishes to free the Commoners. By swaying more of his peers to join his cause in maintaining the Empire's ways, Profion gained more time to formulate his next plans.

The Search for Rod of Savrille

In order to find a way to rid Savina, Provion sends his imp familiar to spy on her progress. The imp overhears Savina's conversation with Vildan, one of her supporters and the mage-in training Marina's mentor, which revolves around the Rod of Savrille, a powerful ancient staff which is more powerful than hers and enable the control over Red Dragons said to be stronger than her brood of Gold Dragons. Excited by its reports, Profion sends his sorcerous henchman Damodar to find clues to the whereabouts of Rod of Saville.

Displeased with Damodar's failure to capture Marina, Snails, and Ridley due to small intervention with Elwood the dwarf, Profion punishes Damodar by magically conjured a tentacled monster into his head that endows him the ability to painfully and forcefully read other people's memories. After sending his familiar imp again to guide Damodar and ensure his success during his quest, Profion holds another meeting with Empress Savina and the entire royal council of Izmir Empire for the last time just as Damodar killed Snails. With neither sides able to find an agreement, the Councils of Izmir splintered into two factions that wage war against one another; one that led by Profion and another by the young Empress.

The Battle for Izmir

As the huge battle broke out at Sumdall, the capital city of the Empire of Izmir, Damodar eventually obtains the Rod of Saville from Ridley and hands it to Profion. Damodar demands him to release the monster within his head, and Profion complied by dispelling the beast before bringing his newly freed second-in-command with him to test the Rod's power together at the roof of Sumdall. With Rod of Saville in his possession, the wicked Mage summons the dreaded Red Dragons to turn the tide of the battle against Savina's gold dragon. The battle escalates further by the time Ridley kills Damodar before confronts Profion himself in a duel.

Profion easily overpowers Ridley and all of his newly arrived companions in a short fight. Just as the ruthless Mage holds them at his mercy, Ridley grabs the Rod of Savrille and successfully uses it to stop the red dragons, surprising Profion who didn't expect the thief's newfound ability to perform such feat as much as him. However, realizing that the Rod's magic is corrupting him into the very being he despised, Ridley heeds the Rod's undead maker Mage Savrille's warnings about the scepter by furiously destroying the staff much to Profion's dismay and breaking the curse that has consumed Savrille.

Empress Savina then arrives with her trusted golden Scepter of Izmir and corners Profion. The loss of Rod of Savrille, coupled with the prospect of the young empress' victory over Mages' tyranny he fight for, caused Profion to angrily summon a skeletal imp to have it pin the Empress down into her knees and torture her, all while speaking illegible incantations. Enduring the assaults, Savina musters enough strength to summon one of her surviving gold dragons to interject the mad Mage's huge tantrum from behind and unceremoniously devour him, ending his tyrannical reign once and for all.

Profion was mentioned by Damodar who declared his vengeance against descendants of those who defeated his master. It's also revealed that the monster that Profion inserted into Damodar's head left behind an immortality curse that turned him into an undead, driving him himself until he finally breaks it with the Orb of Faluzure, a special orb to contain the very power of Faluzure himself.

Profion presented himself as a charismatic and capable politician, but does not make much effort to hide his evil nature, demonstrating demanding and impulsive behavior. He is ruthless, brutal, and domineering in his pursuit for his heinous goals. A testament of his manipulative side is best displayed through the meeting with the councils where he exploited their fear for possible changes in the Empire of Izmir's ways. As capable as he seemed as a mage politician, he lacked the necessary wisdom that his rival Empress Savina possessed.

He also represented the worst in mage supremacists in his time; a utterly pitiless and cruel elite who bears low opinion towards commoners just because he has a great power over them. His rivalry with Empress Savina also unveil the mage's power hungry side, as Profion is more than eager to outperform his rival and proving himself a better ruler of the Empire of Izmir. His determination and cruelty reached to the extent where he displayed lack of hesitation in cursing his lieutenant Damodar in response of his failure and willingness to usurp complete control of the Empire of Izmir for himself by any means necessary, even by force. 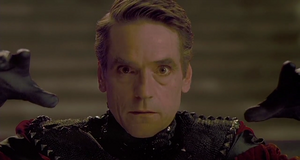 Close-up of Mage Profion using his magic during his sorcerous experiment to control dragons. 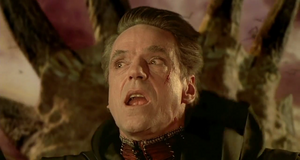 Profion about to meet his end. 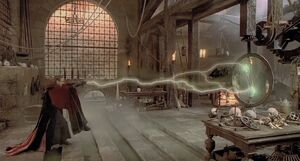 Profion giving the final touch on his experimental dragon scepter. 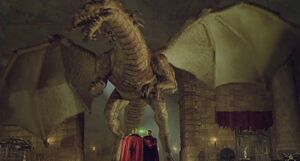 Profion stops Elwood with a binding spell.
Add a photo to this gallery

Retrieved from "https://villains.fandom.com/wiki/Profion?oldid=3891357"
Community content is available under CC-BY-SA unless otherwise noted.