The Pickman Project are the overarching main antagonists in Manhunt 2.

The Pickman Project is a secret research facility founded by Dr. Pickman in order to perform cruel experiments on innocent people for profit.

Experiments went smoothly for The Project for a while until the US government abruptly cut their funding due to them being cruel and inhumane.

Dr. Pickman however decides to do one last project anyways to try and convince the government to let them continue their work, The Pickman Bridge: Making genetically enhanced super soldiers that are immune to interrogation if they're caught by the enemies by giving said soldiers separate personalities that wouldn't remember anything they've said or done in the past.

The second personality made for Daniel is named Leo Kasper, a remorseless killer and assassin. The bridge however malfunctioned as Daniel was able to speak with Leo and believed him to be an entirely separate person.

Daniel kidnaps his best friend, Michael Grant, in order to try and help him remove the bridge. Michael refuses saying that doing so could possibly kill Daniel.

Not wanting their secret experiments known to the world, The Project sends Project Militia to try and kill Daniel. Leo however takes over and kills Michael, then escapes the island, with Daniel unaware of what happened for the time being.

Sometime later, Leo and Daniel assassinate Stanley Grex, a rich businessman who was funding The Project. Once again, Project Militia are deployed to try and kill Daniel, but Leo takes over and escapes once again.

To punish all the members of Project Militia, they're all either sent back to prison to carry out death sentences or experimented on by Project Scientists and turned into Dixmor Inmates and The Legion.

In order to try and completely erase their past and live new lives, Leo convinces Daniel to burn down a Project archive facility that has their files inside. The fire however sets off the alarm and The Project sends in Watchdogs to try and kill them once again, but fail when they escape.

In a final effort to permanently separate themselves from their past, Leo goes to Daniel's old home and brutally murders his wife in front of their children. The Project however finally have the jump on Daniel and capture him, give him amnesia, and send him to Dixmor Asylum to try and permanently silence him.

Thanks to a freak accident when lightning knocks out the power to the asylum, Daniel is able to escape with Leo and slowly put his memories back together with old reminders from his past until he finally catches Dr. Pickman. Daniel tries to convince Dr. Pickman to remove the bridge but when Pickman tries once again to initiate a hypnotic state on Daniel, Leo goes insane and stabs him to death.

With only one option left to try and remove the bridge, Daniel and Leo track down Dr. Laura Whyte, though she finally exposes everything Leo has been doing and helps him kill Leo once and for all.

Dr. Whyte gives Daniel a new life as David Joiner where he remembers none of his past but has a new peaceful life. Dr. Whyte then most likely exposed The Project's action to the world and any surviving members would be arrested for crimes against humanity.

Victim of FR32 deceased
Add a photo to this gallery

Victim of Cavus being tortured

Victim of Cavus fully "reprogrammed"
Add a photo to this gallery

Either Daniel or Leo during the Eminus field test

Close up of the target, a beta version of Project Militia
Add a photo to this gallery

Victim #4
Add a photo to this gallery 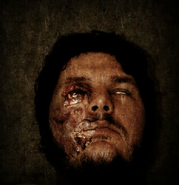 Victim's severed head
Add a photo to this gallery

Victim of Revera 7 fighting with an orderly

Victim being beaten by Orderlies
Add a photo to this gallery

The Project's logo in a man's eye. 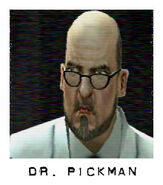 The founder and leader of The Project, Dr. Pickman. 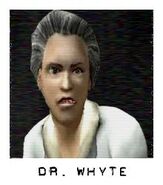 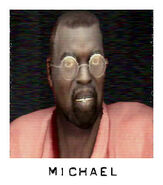 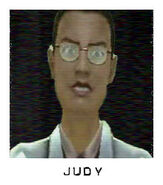 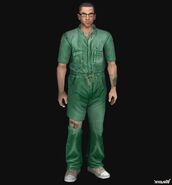 Retrieved from "https://villains.fandom.com/wiki/Project_Pickman?oldid=3754332"
Community content is available under CC-BY-SA unless otherwise noted.