Ability to run people over

Kill as many humans as possible.

Project Satan is an antagonist in the animated series Futurama. He made his debut in the episode "The Honking", which is a parody of the 1981 film The Howling.

He was voiced by David Herman.

Project Satan, the original were-car, was built from parts of other evil cars, of which the following was identified:

From Project Satan a line of were-cars were created as several robots were bitten, of which Calculon was the first to be infected. While staying in the castle in Thermostadt he inherited from his late uncle Vladmir in the year 3001, Bender was infected by a local were-car. The Planet Express Crew then tracked down Project Satan to the Anti-Chrysler Building, by following the line of infected robots, and managed to destroy him by making him drive into a furnace, thus curing all those infected by the were-car virus. 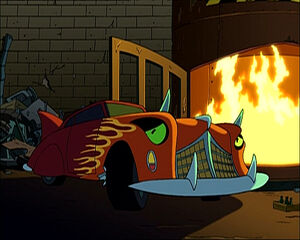 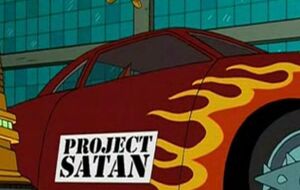