Prometheus spends most of the game under the guide of Director Glover, aiding the heroes with their plans. However, after Galena is defeated, Prometheus appears, and decides to not save her despite her servitude. He also reveals himself to be behind the world's merging, and plans to merge every Jump Force world as well as the real world to rule over all. Challenging the player to beat him in a effort to save the world, he is defeated.

As Director Glover, he takes the form of a bald black man wearing black glasses, a black jacket with various blue belts and a cape, blue gloves, yellow pants, and blue boots.

As Prometheus, he transforms into a blue and gray humanoid creator, with blue wings, sliver bracelets, his boots, and red eyes.

Glover keeps a friendly but stoic facade, willing to save the world from the merging threat and defeating those who dare try to destroy it. However, he is really a destructive, power-hungry figure, trying to fuse every world together to rule them all. 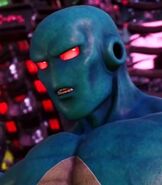 Add a photo to this gallery
Retrieved from "https://villains.fandom.com/wiki/Prometheus_(Jump_Force)?oldid=3557747"
Community content is available under CC-BY-SA unless otherwise noted.