The Promise Pie is the main antagonist of the Regular Show episode "Pie Contest".

He is voiced by J.G. Qunitel who also voiced one of the Talking Hot Dogs.

The pie is a trickster that makes people believe in him but he is a big liar, he also likes eating people though none of them died when he ate them.

Mordecai and Rigby seek the pie's help in order to finish their job of judging the pies. At first they skip his offer, but they allow the pie to help them after they find judging too hard. The pie tells them to not come out until he says and it turns out he was causing a rampage and turned gigantic. Mordecai and Rigby manage to defeat the Promise Pie by telling the truth about how everybody's pie tasted, thus shrinking the pie to his original self. The weakened pie asked what hey thought about him, only to have Mordecai pick him up with a shovel and toss him toward a nearby garbage truck, killing the pie in the process.

He reappears in a flashback by Thomas in the Regular Show special "The Real Thomas". 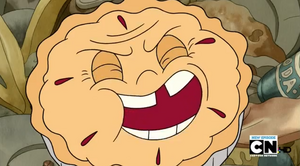 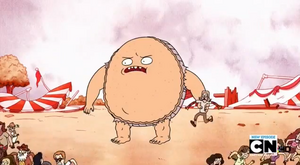