Minister of Fortitude
Truth
Voice of the Covenant

Ruler of the Covenant Empire

Wrest control of the Covenant from the other prophets and assume absolute power.

Oust the Sangheili from the Covenant (all succeeded).
Wipe out humanity to cover up the truth of the Forerunners' legacy.
Activate the Halo rings to ascend The Great Journey, slaughter all life in the entire Milky Way galaxy and remake the galaxy in his image with himself as god (all failed).

When Truth and the other prophets learn from the Forerunner AI 032 Mendicant Bias that the Humans are the chosen successors of the Forerunners, meant to inherit their legacy, they decide to covert this knowledge from the Covenant to prevent a revolt, the collapse of the Covenant and their deposition as divine leaders.

His ultimate goal is to assume full control of the Covenant as well as oust the Sangheili from the Covenant and activate the Halo Rings to wipe out life in the galaxy, in order to remake the Galaxy in his image with his followers heralding him as god.

Ord Casto originally served as a junior staffer in the Ministry of Concert. While working there, Ord uncovered a plot by several Kig-Yar Shipmasters to poison Infusions, recreational narcotics often enjoyed by Unggoy, to render the Unggoy infertile as retaliation for the Kig-Yar nests that had been displaced by a recent boom in the Unggoy population. Casto reported the incident to his superior, the Minister of Concert who issued a fine to the Kig-Yar involved in the scheme. Feeling the punishment was too lenient, Casto attempted to submit a formal complaint, but was blocked. The Infusion Incident soon brought about the Unggoy Rebellion, leading into the 39th Age of Conflict. After the rebellion was put down and the Unggoy were brought back into the Covenant, Casto was promoted to Minister of Fortitude.

Fortitude was later notified by the Vice Minister of Tranquility that a Luminary had discovered a massive trove of Forerunner relics on planet Harvest. Intending to use the artifacts to advance to a high position within the Covenant, Tranquility offered the same for Fortitude, who accepted. Rather then use Sangheili to retrieve the artifacts, the two chose to use the Jiralhanae instead so they wouldn't upset the fine balance of power by leting the Sangheili obtain them. Fortitude and Tranquility also began a plan to become the next Prophet Hierarchs of the Covenant by exposing the Prophet of Restraint, one of the current Hierarchs. Before doing so, the two visited the Forerunner dreadnought and met with the old Philologist on board it to receive advice from the ship's "Oracle", which had long been inactive. The two decided to input the Luminary's data on Harvest to see what would happen. Much to their surprise, the Oracle, in actuality a fragment of the Forerunner Contender-class A.I. 032 Mendicant Bias, suddenly reactivated and revealed that they'd misinterpreting their findings. The AI revealed that the humans were actually the true inheritors of the mantle of the Forerunners and that the Forerunners had in fact not ascended when they activated the Halo rings. Mendicant then attempted to use the Dreadnought to take the humans to the Ark, but was short-circuited by Lekgolo worms exploring the vessel's pathways.

As the truth spoken of by the Oracle revealed the Covenant religion to be false and would surely tear the Covenant apart if it got out, the three San'Shyuum who had bore witness to the revelation swore to secrecy. Fortitude and Tranquility decided to bring the Philologist into their plan to become Hierarchs and go forward with their plans to oust the current ones. Having discovered that the Prophet of Restraint had secretly fathered two children when he offered Tranquility a high position if he adopted the children, the Fortitude and Tranquility used the information to blackmail Restraint and make him and the other two Prophet Hierarchs step down or they would reveal his affair. The Minister of Fortitude, Vice Minister of Tranquility and the Philogist then took their place as Prophet Hierarchs ascended to become the new rulers of the Covenant. Fortitude chose "Truth" as his Prophet name as a reminder of the lies he would tell to keep the Covenant in order.

To prevent the truth about the humans being the true Reclaimers from being discovered, the three Hierarchs declared war on humanity with the intention of wiping them out and staying in power.

The Prophet of Truth first appeared during Supreme Commander Thel Vadamee's trial, where he was already seen as more dominant than the other Hierarchs and later made Thel the new Arbiter of the Covenant, making his first assignment to assassinate Sesa Refumee and his Heretic followers. After the recent murder of the High Prophet of Regret, Truth organized the Changing of the Guard where Elites would give up their positions as Honor Guards to the Brutes, one of the stages that Truth planned to overthrow the Elites with Brutes as the latter were more loyal and easier to use as pawns.

After the capture of 343 Guilty Spark, he sent Thel Vadamee to retrieve the Index (Sacred Icon) from the Flood and Forerunner Sentinels that are guarding it. Truth soon had the Index in his hands and when John 117 infiltrated High Charity, Truth escaped alongside Mercy and ordered his Brutes to kill him. John's main objective was to find Truth and get the Index from him, but Truth made his way to the Phantoms with Mercy and Tartarus. He gave the Index to Tartarus and wanted him to begin the Great Journey, then Truth left High Charity to lead Covenant forces in invading Earth.

On Earth, Truth led a fleet and first appeared in Crow's Nest where he gave a hint to the UNSC forces there that they will die in the fire. Holograms of Truth was then spread throughout various missions that involved Covenant enemies, where Covenant forces preached to him and listened to his every word until an enemy attacks them. Truth then appears in person on The Covenant, where he has Sergeant Johnson captured and used him to fire the Halo Array, he also murdered Miranda Keyes with a Brute Spiker. Both John 117 and Thel then confronted Truth and stopped him from activating the rings. Thel then got his revenge by impaling the Prophet, ending Truth once and for all. The death of Truth left the Covenant leaderless and resulted in a power vacuum which led the Covenant to splinter into multiple remnant factions such as Merg Vol's Covenant or the Storm Covenant led by Jul 'Mdama and officially brought the Human-Covenant War to an end. The Banished, a faction which had splintered from the Covenant prior to the Great Schism, also grew more powerful by absorbing some of the Covenant remnant forces.

Prophet of Truth assembled a Brute fleet to attack the New Mombasa which ODSTs were deployed in and were ordered to kill all the remaining Elite commanders as well as Human survivors. If you get the Legendary Ending, Truth will appear in person with two Engineers beside him and oversee Phantoms going to Earth. 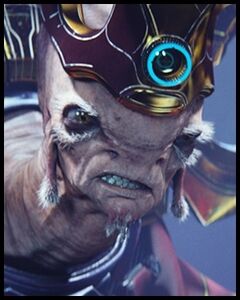