Prosciutto is a minor antagonist in JoJo's Bizarre Adventure: Golden Wind. He is an assassin from La Squadra di Esecuzion, an elite squad apart of the gang Passione that defected, and was partnered up with fellow squad mate Pesci.

Prosciutto and Pesci were sent by Risotto Nero to intercept Bruno Buccellati and his group at the Naples Train Station, so that La Squadra di Esecuzion could find out their boss 's true identity. Although they were unable to locate them at the station, they did spot Buccirati's group board the near by train for Florence and proceeded to hijack it.

Once aboard the train, Prosciutto and Pesci lose track of the Buccellati group because of their newly acquired turtle stand. In order to lure them out into the open, Prosciutto activated his stand, The Grateful Dead, and caused everyone on the train, including himself, to begin to age rapidly. Taking advantage of his apparent old age and blending in with the rest of the aged passengers, he was able to ambush Guido Mista and save his partner from certain death. With Mista seemingly disposed of, Buccellati has no choice but to confront Prosciutto.

After a lengthy fight with Buccellati, Prosciutto gets knocked out of train and wedged in between its wheels. Initially, Buccellati believes Prosciutto to be dead until he releases that the aging effects of The Grateful Dead are still ongoing, as Prosciutto barely hangs on to life with the last amount of his energy. Ultimately, he finally loses the will to live upon witnessing Pesci die to the hands of Buccellati.

Prosciutto's actions while aboard the train to Florence show him being both cold and ruthless to those aboard the train. He doesn't have a second thought about activating The Grateful Dead, putting a train-full of civilians into danger and in some cases killing, and almost succeeds in executing Mista with three bullets to the side of his skull.

Prosciutto also revealed that he has a high amount of willpower during his and Pesci's attempt to kidnap Trish. These were highlighted by his willingness to put himself under the effects of The Grateful Dead and still retain his same mental state, as well as his determination to keep his stand's effect active while being crushed by the train's wheels.

It is shown by his interactions with Pesci that he honestly does care for his partner and has a brotherly relationship with him, as Pesci always refers to Prosciutto to as "big brother". He is also seen belittling Pesci whenever Pesci screws up or begins to doubt himself, but he always tells Pesci that he criticizes him because he wants Pesci to gain more confidence in himself and fully realize his true potential, for Prosciutto is aware that if Pesci were able to unlock his true potential he would be stronger himself.

Prosciutto possesses the stand The Grateful Dead, which gives him the ability to cause rapid aging of all living things, both physically and mentally. The exact range of The Grateful Dead's powers is unknown but it is enough to affect an entire train-full of people. Prosciutto can also use the differences in body temperatures of males and females to accelerate or slow down the aging process, in the case presented in Vento Aureo he was targeting a female so a cooler body temperature would slow down the aging process. This also proves to be a weakness of his stand if his targets learn about this factor as Buccellati and Mista took advantage of it by constantly keeping ice on them. 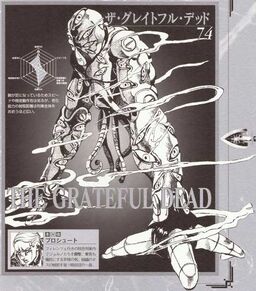 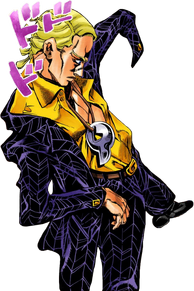 Prosciutto appears as a shadowy figure in GioGio's Bizarre Adventure. 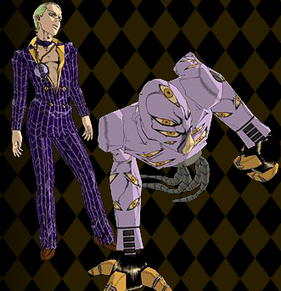 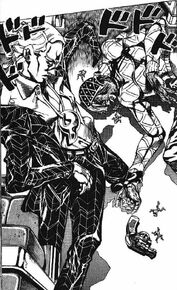 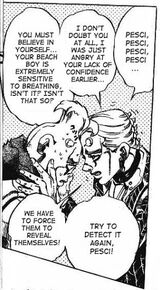 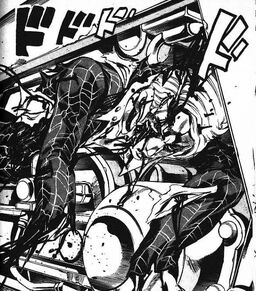 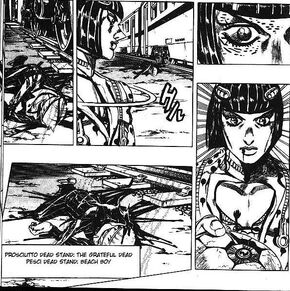 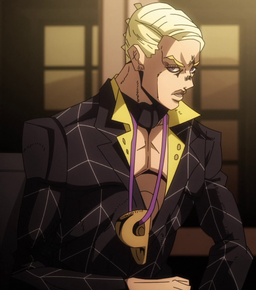 Prosciutto in the anime. 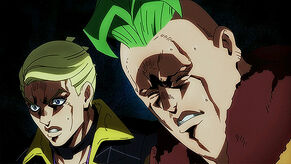 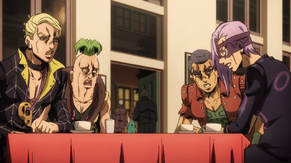 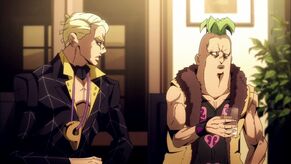 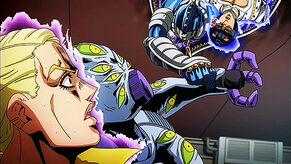 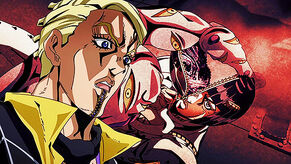 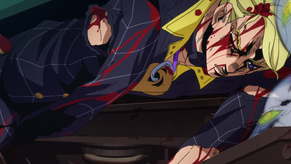 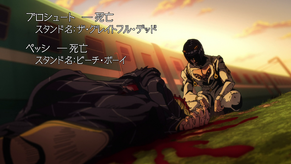 Retrieved from "https://villains.fandom.com/wiki/Prosciutto?oldid=3500551"
Community content is available under CC-BY-SA unless otherwise noted.