Proteus is an antagonist from the animated series Gargoyles, appearing in the season 2 episode "The New Olympians". In this series, New Olympians are a race of superhuman beings that resembled the various creatures of Greek Mythology, from whom they were descendants. This race lived on the isolated island known as New Olympus, somewhere in a vast ocean. As the name suggests, Proteus was descended from the shapeshifting sea god/demigod of myth, in turn a son of Poseidon. Unlike his predecessor, Proteus was openly malevolent and cruel, acting as the island's resident troublemaker, who sought to leave the island and was responsible for the murder of previous chief of security, the father of Taurus, an ancestor of the Minotaur.

He was voiced by the late Roddy McDowall, who was also known for having voiced The Mad Hatter on Batman: The Animated Series, a contemporary with Gargoyles.

Proteus was evil, corrupt, treacherous and sadistic, taking delight in deceiving and psychologically torturing others. After murdering the father of Taurus and having been sent to jail because of it, Proteus transformed into the first in order to mock Taurus, asking him to "have mercy for his poor father". After almost having killed Taurus, the shapeshifter transformed into his father once more as a scornful insult. He was also a sociopathic and demented person who loved senseless destruction and mayhem, such as when he overloaded the island's power-plant which would have caused the island to blow up, something to which he didn't even bat-an-eye.

Unlike most other New Olympians, Proteus showed no grudge against humans, rather he was sarcastic and snide regardless of species. The only rude reaction he ever gave Elisa while she was being persecuted in jail by an angry mark was a sarcastic observation: "They (the crowd) don't seem to like you very much, do they?!".

Proteus wreaked havoc on New Olympus several times and attempted an escape into the outside world, presumably to create more trouble there for his own amusement. During his penultimate attempt to escape New Olympus, he murdered Taurus' Father, who was the Chief of Security at the time. Afterwards, Proteus was locked up in a force field cell in New Olympus's prison while Taurus succeeded his late father and harbored an ardent grudge against Proteus, as he put it "he is not like other New Olympians, he is evil".

When Goliath, Elisa, Angela, and Bronx came to New Olympus on the Avalon World Tour, Elisa was forbidden by Boreas, leader of the New Olympians, from leaving the island on the grounds that she would potentially reveal the island's location to humanity. She is later arrested by Taurus for instigating a riot among the local New Olympians, in truth it was the human-hating police officer Helios. Proteus makes his first appearance disguised as Taurus's Father in order to mock the chief of security, he even gleefully brings up his father's murder. Elisa was placed in a cell next to that of Proteus, the latter whom asked about how she and her friends had arrived on the island, but Elisa simply remarks "we have our ways". Proteus decided to take advantage of the gargoyles's arrival to make a fresh escape. As Goliath broke into the prison in order to free Elisa, Proteus first masqueraded as her to trick Goliath into freeing him, and then, after subduing Goliath and imprisoning him in his cell, transformed into Goliath to break Elisa out, hoping to trick her into leading him back to the skiff. While hiding among the city's alley-ways, Elisa noticed that "Goliath" did not turn to stone during daylight, to which Proteus lied that the island's force field must have acted as a buffer for the sun's raise. He separates from the Elisa and decides to enter the city's Columnadium and overload the power supply, which would have destroyed New Olympus in a massive explosion. Fortunately, Elisa (who had by now deduced Proteus' true identity) chased after him, hijacking Helios's hover-chariot, whom she had to knock unconscious after he refused to listen to her. The policewoman forces Taurus to follow her at the power-plant, where Proteus had destroyed its guardian, the robot Talos, and was about to cause the plant's meltdown. Proteus tries tricking Taurus into rearresting Elisa after transforming into Goliath, but she points out that the Goliath hadn't turned to stone, and as such a fight ensues between Taurus and Proteus, now under the guise of a cyclops. The victor proves to be Taurus, who avenges his father after punching the shapeshifter unconscious. Taurus successfully cools down the power-plant, thus preventing the incoming explosion. Proteus is enveloped in a goo that prevents him from shapeshifting and is subsequently sent back to prison.

Having aided in saving the island from Proteus's scheme, Elisa proves to Taurus and Boreas that humans can be trusted.

In this episode, Proteus escaped from his prison in New Olympus and arrives in New York. He takes revenge on Goliath and Elisa. He gets captured and is defeated by Goliath, Elisa, Angela, Hudson, and eventually Taurus.

Gargoyles creator, Greg Wiseman, intended to release a spin-off animated series titled The New Olympians, but it never came to fruition. The show would have focused on the eponymous race revealing themselves to humanity in hopes of befriending the human race while having to face prejudice, as well as opposition from and two rival factions of New Olympians: one made of human-haters and the other seeking to proclaim themselves as gods to the humans. Proteus would have most likely had made reappearances as a regular antagonist.

Proteus had the power of shapeshifting, capable of taking almost any form he saw fit. His transformation was magical in nature, but unlike The Tricksters who became enveloped in light before changing shape and size, Proteus would first turn into an amorphous blob of goo. He could take on a variety of shapes, from the human appearance, such as Elisa Maza, into a monstrous gargoyle, and even a far larger appearance. His preferred battle form was that of a green-skinned cyclops. He could even alter his proportions while stuck in any one form, as was the case with the second time he turned into Taurus' father. Aside from transformation, Proteus could also alter his voice to mimic that of whoever he was turning into. 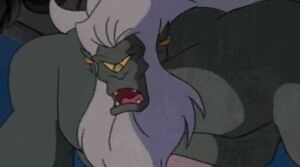 Proteus in his Cyclops form. 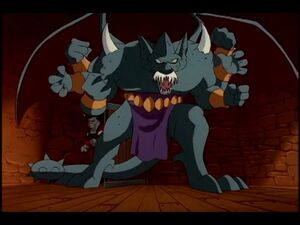 Proteus in his Monstrous Gargoyle form.