Proto Clown is a one-shot villain from The Tick animated series. He is an abnormally large and musclebound clown who manages to do what no other villain has: hit Tick so hard he gets lost in his own headspace. He also a possible parody of Incredible Hulk and Stephen King's clown character "IT".

While not intrinsically evil, Proto Clown suffers from poor self image and insecurity, coupled with rage issues. Created by a geneticist and clown enthusiast named Bud Frontier, his purpose was to be the biggest and funniest clown ever to live. Because he was not able to understand the cloner's intentions, Proto Clown believed that life was a cruel joke, and he was the punch line. He seemed to have been born just to be laughed at, and he hated this fate. Unable to bear the weight of this burden, Proto Clown revolted, rampaging through nearby urban landscapes with only rage to guide him. Proto Clown destroyed things without control, and had no regard for human life, as he saw people as evil things who existed only to mock and torment him. The Tick tried to intervene, but Proto Clown knocked him out of the Earth's atmosphere and unconscious. Other superheroes were near helpless against the blind, psychotic fury of the Proto Clown, so they went into hiding, seeking out Bud, the Clown's creator for advice. Bud shared his regret over making the poor simple minded beast, explaining that he only wanted to make the world laugh, but all he managed to do was bring suffering to the world and the unfortunate creature that he spawned. He pleaded with the heroes to try to love and understand the Proto Clown, and so they tried that approach, and at first it appeared to be working, until Bud accidentally pressed the top of his head against Proto Clown's nose, setting off its honking mechanism and causing Bud and the nearby heroes to laugh. This enraged Proto Clown, but fate intervened as the Tick reentered orbit and landed on him with the destructive force of a meteorite. Bud was able to bring Proto Clown back to his lab unconscious, taking responsibility for the mess he made, and promising that he would devote himself to providing a better life for Proto Clown, starting by deactivating his nose horn. 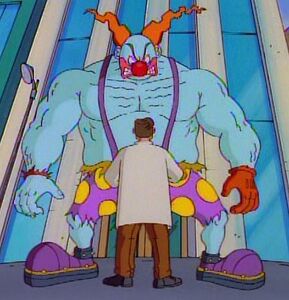 Retrieved from "https://villains.fandom.com/wiki/Proto_Clown?oldid=3780404"
Community content is available under CC-BY-SA unless otherwise noted.