Aaron Davis, also known as The Prowler, is a mentioned character in Marvel's Spider-Man and a supporting character in Marvel's Spider-Man: Miles Morales. He is the uncle of Peter Parker's protégé, Miles Morales, and the younger brother to Jefferson Davis. After being shunned from the family, Aaron attempts to reconcile with his family while also trying to protect Miles by any means.

He was voiced by Ike Amadi, who also voiced Shao Kahn in Mortal Kombat 11, Crunch Bandicoot in Crash Team Racing: Nitro-Fueled, The Darkness in Skylanders, Angor Rot in Tales of Arcadia, and Mollaka Danso in the Quantum of Solace video game.

Aaron Davis is the brother of Jefferson Davis, and the two would often spend time together making beats from noises across New York City. Aaron became a criminal during his teenage years, even telling Miles in a recording that he got his first mugging a criminal's boss for his money. Aaron eventually became a thief for hire as "The Prowler", but spent most of his time playing with his nephew, Miles Morales, and hanging out with his brother. Eventually, Jefferson learned that Aaron was the Prowler, refusing to take responsibility and turn himself in, Jefferson cut all ties with him and wanting Aaron to stay away from his family. Though bitter that he became estranged from his family, Aaron continued his activities as the Prowler, but also tried to reconnect with them by getting a job as a subway worker.

Aaron is mentioned in Marvel's Spider-Man in news reports after Jefferson's death at the hands of Mister Negative and the Inner Demons.

When Miles Morales and Spider-Man battled Rhino, Aaron saw the two fighting and realized that the younger vigilante was his nephew, having recognized the moves he taught him. Aaron used the Spider-Man app to have Miles help him get the trains in order, and gives Miles a one-year free train rides with his name on it. He then revealed that he knows Miles is Spider-Man, but tells his nephew that to call him if he needs help. Aaron later went to his sister-in-law, Rio Morales' campaign rally, but left before she could see him there. When Spider-Man was fighting the Underground on the bridge, Aaron called and informed Miles that he should leave once Roxxon Security shows up, as they would blame anyone for the mess. Seeing that Miles was in trouble with Roxxon Security, Aaron returned to his mantle as the Prowler, helping his nephew when he broke into a Roxxon lab to find Phin Mason's phone.

After dealing with Roxxon Security soldiers, Aaron and Miles escaped from the lab via a subway, and the former learned that the Tinkerer was Phin. Aaron then advised Miles to give up on his life, and told his nephew that he told Jefferson about his identity, which lead to him shunned. Seeing that Miles was determined to stop the Tinker, Aaron told his nephew to manipulate Phin to get information. When Miles felt stressed out from being a vigilante, he contacted his uncle to catch up and break away from his heroics. Aaron told Miles that he and his brother would make music beats, and gives him files to find across New York to make a music mix in the mean time. Aaron then manipulates Miles to reveal where he and Phin were meeting, and informs Krieger of their location, making a deal with the businessman to not harm Spider-Man.

Krieger goes back on their deal, sending Rhino to kidnap both Phin and Spider-Man, and taking them to a secure Roxxon facility. Angered, Prowler confronts Krieger, who states that Spider-Man is leverage to get more information, but Aaron tells Krieger that he knows what he did to Phin's brother, Rick Mason. Krieger refutes Aaron's statement by saying that the Prowler's crimes could lead him to prison as well, knowing that the Prowler is too much a coward to take responsibility for his actions to expose Krieger's crimes, ending the argument. Miles and Phin managed to escape, but the latter continued on her goal to destroy Roxxon Plaza, and foolishly ended her friendship with Miles after trying to stop her from becoming a killer.

Aaron later learned that Miles escaped and was still determined to stop Phin and Krieger, and not wanting to lose his nephew, kidnapped and imprisoned him in a abandoned subway terminal. Aaron and Miles argue, fed up with Aaron's cowardice and holding him back while innocent people are in danger, Miles breaks out and battles hid uncle, and the former is defeated and attempts to explain his actions to his nephew. Miles rejects his words, telling his uncle that he needs to be more than family and that he should help others instead of looking after himself.

Taking his nephew words to heart, Aaron returned to help Miles protect the citizens of Harlem, and get them to safety as the Roxxon Plaza's reactor was overloading. After Miles and Phin succeed in stopping the reactor from destroying Harlem, Aaron turned himself into custody and betrayed Krieger. Though Aaron was sentenced to prison, the news reports that his sentence could be reduced since he revealed Krieger and Roxxon's crimes. If the player collects photos, Jefferson will tell Miles in audio that he wishes that he could reconcile with Aaron, and that he knows that there is good in him. If the player also finds all of the music mixes, the last will take them to Aaron's former hideout, where Miles obtains the "Purple Reign Suit". 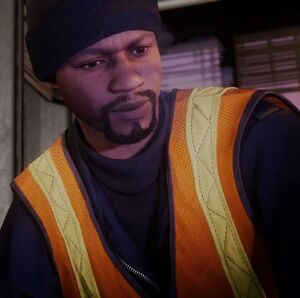 Aaron as a train station worker. 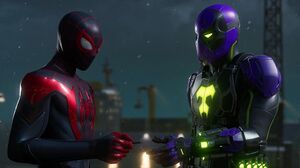 Prowler with Miles, giving him the first of his and Jeff's music mix beats. 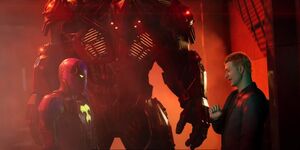 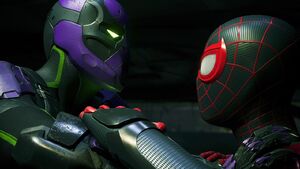 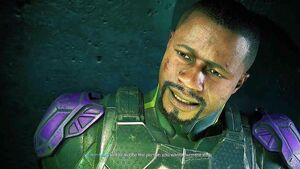 Prowler's temporary defeat, apologizing to Miles for his actions and telling him he didn't wanna lose him like how he lost his brother. 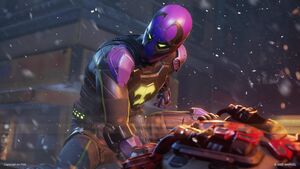 Prowler returns to help Miles and his allies.