Prevent anyone from stopping his rituals.

The Prowling Magus is a minor antagonist in Dark Souls II. He is an evil sorcerer who leads a group of hollows called the Congregation to aid him in conducting dark rituals in the Brightstone Cove Tseldora.

The Prowling Magus was a warlock from Aldia's Keep who partook in forbidden rituals, infecting his mind with dark magic. It is unknown if he was already mad, or if his misdeeds drove him to madness. After the Brightstone Cove Tseldora was abandoned due to an outbreak of spiders caused by the wrath Freja, the Magus took the opportunity and occupied himself inside a chapel leading to the mining town to conduct his sinister rituals. The hollows he encountered were enslaved by his magic to assist him in killing those who venture into Tseldora to use as sacrifices.

The Bearer of the Undead encounters the Prowling Magus and his Congregation in the chapel in Tseldora. The Magus' Congregation is made up of two Hollow Priests, five Undead Laborers, and three Undead Supplicants. The boss fight is not very challenging as the Prowling Magus nor his Congregation have high health or defense, but the number of enemies can easily overwhelm the player if they play passively. While the Congregation attack physically, the Magus keeps his distance and attacks with black magic from his staff, in the form of a small quick spear, an orb, or a blast when the player approaches him. Killing the Hollow Priests first is advised, as they can heal themselves and the other members of the cult. Once the Prowling Magus and his Congregation are defeated, they drop a Titanite Slab and the exit of the chapel is opened leading to the rest of Tseldora and the pit containing Freja.

A second Prowling Magus can later be found near the Rise of the Dead bonfire in the Shrine of Amana. The difference here is that he is not supported by a Congregation, but he has more health and his magic deals more damage. In Dark Souls II: Scholar of the First Sin, the Magus at the Shrine of Amana is replaced with pyromancers. He is relocated to Aldia's Keep, found in the back of the room requiring the Aldia Key. Unlike the Magus in Tseldora or at the Shrine of Amana in the original version, the one in Aldia's Keep spawns again after resting at a bonfire. 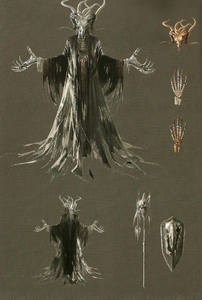 Concept art of the Prowling Magus. 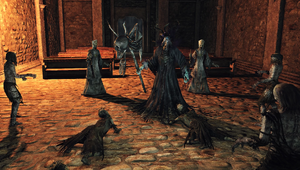 Prowling Magus and his Congregation. 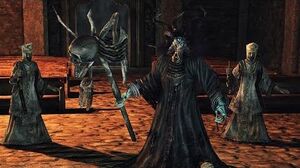