She is a high-ranking member of the Black Order who (alongside Ebony Maw, Cull Obsidian, and Corvus Glaive) assists Thanos in his quest to collect the Infinity Stones.

She was portrayed by Monique Ganderton and voiced by Carrie Coon.

Proxima was first seen raiding the Asgardians' ship following the destruction of Asgard by the deceased Surtur. Along with her father and siblings, she slaughtered the Asgardians to their deaths just as Thanos fights against the raging Hulk. When the defeated Hulk is sent back to Earth by Hemidall (who ends up being killed by Thanos), Proxima helps her siblings in forcing Loki to surrender the Space Stone (the Tesseract) to Thanos. It is also revealed that Proxima was involved of her father's attack on the planet Xandar to gain possession of the Power Stone (the Orb), which he used to destroy Xandar. After Thanos kills Loki, Proxima escaped with her family as Thanos uses the Power Stone to destroy the Asgardians' ship, leaving a helpless Thor to drift in space.

With two of the Infinity Stones in place, Thanos sends the Black Order to Earth to collect the Time Stone (the Eye of Agamotto) and the Mind Stone while he personally travels to Knowhere to collect the Reality Stone (the Aether) from the Collector and Vormir to collect the Soul Stone from the Red Skull. Assigned to collect the Mind Stone, Proxima and Glaive tracked down its location in Scotland, where they spot Vision (the current holder of the Mind Stone) and Scarlet Witch. Both Proxima and Glaive attempt to ambush the two, but the arrival of Captain America, Black Widow and Falcon forced the two to escape back into space. The Avengers then send Vision out to Wakanda, in hopes that they could use its technology to safely remove the Mind Stone and destroy it with Scarlet Witch's powers.

After collecting the Aether and the Soul Stone, Thanos heads over to Titan, where he defeated several Avengers and Guardians to get the Time Stone (the Eye of Agamotto). Around the same time, he sends Proxima, Corvus and Obsidian to Wakanda, ordering them to lead a massive army of Outriders to attack the country and obtain the Mind Stone at all costs. This forces several Avengers and Wakandan warriors to fight back against the massive army. During the battle, Proxima eventually meets her end when Scarlet Witch uses her magic to blast her into the spinning blades of one of her own war machines, but not before Proxima tells her that Vision will die alone and that Scarlet Witch will suffer the same fate. The rest of Proxima's siblings and the Outriders ends up being killed as well, thanks to the arrival of a returning Thor, Rocket Racoon, and Groot with a new powerful weapon called Stormbreaker.

Despite the massive losses, Proxima, despite dying in process, in a sense ultimately still managed to allow Thanos to obtain the Mind Stone, as her strategy of having Glaive sneak into Wakanda's Castle forced Vision out into the open and left him vulnerable to Thanos, allowing Thanos to kill the android and retrieve the Stone. Even when Thor used Stormbreaker to strike Thanos in the chest, Thanos used all of the Infinity Stones to wipe out half of the universe's populace in retaliation, taunting Thor that he should aimed for the head instead. Thanos also mentioned her along with his other children when he solemnly admitted that he had lost everything in exchange for his victory. Indeed, Proxima's prediction even became true when Scarlet Witch starts to disintegrate to her death along with several Avengers and Guardians while a triumphant Thanos escapes and oversees a sunrise from another planet.

Durning the Battle in Upstate New York, She can be seen during the final battle along with the rest of the Black Order. They began to fight until they ended up dead along with the rest of Thanos' forces after Iron Man's snap. Before being disintegrated herself alongside Corvus, Proxima can be seen in the background cradling Corvus himself, who had been wounded early on by Okoye. 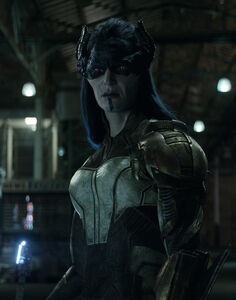 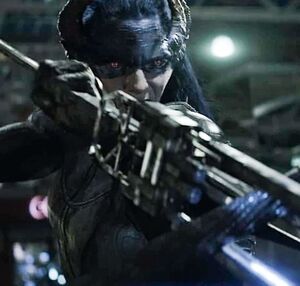 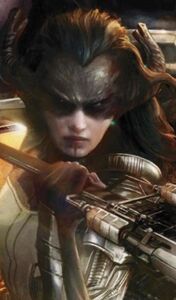 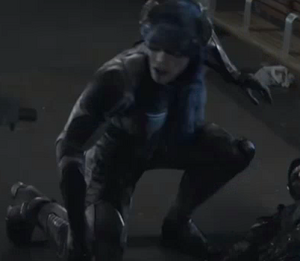 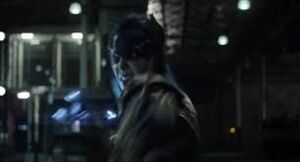 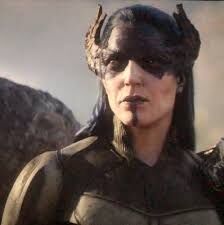 Proxima being killed by Scarlet Witch during the battle of Wakanda.

2014 Proxima and Corvus' dying before turning to dust. 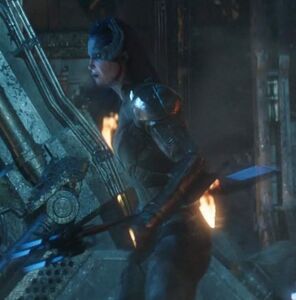 Proxima Seeing Hulk travel through the bifrost to Earth 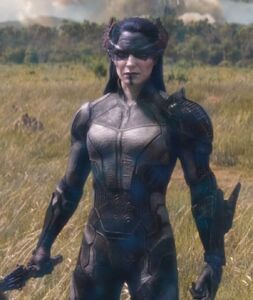 "We have blood to spare" Proxima about to summon the outriders