Prudence, also known as "The Junk Food Kid", is a character in the Nicktoon Rugrats.

She is the antagonist in the episode "Showdown at Teeter-Totter Gulch".

The Junk Food Kid is the bully at the western-themed playground who comes by during "No-Shadow Time" (noon) and demands to have the playground to herself, otherwise hurting anyone that doesn't comply.

When Tommy Pickles and Chuckie Finster go to the playground for the first-time, they meet a girl named Belinda whom they befriend and noticed she got a bandage on her arm from being pushed by her. While the three babies play, "No-Shadow Time" comes and while everyone else leaves, Tommy, Chuckie and Belinda stay as The Junk Food Kid appears, not exactly warming up to the new kids there and demand that they leave. When they refuse, The Junk Food Kid retaliates by slapping Chuckie with her chocolate bar, causing the printing on the bar to be "branded" on his face, sticking her Popsicle down Tommy's diaper and blowing bubble gum onto Belinda's hair. The Kid then leaves as the others are reduced to tears.

The next day, Tommy returns to the playground once again, noticing Belinda having her hair cut because of the gum damage. Tommy then becomes determined not to let The Junk Food Kid push them around anymore. Again "No-Shadow Time" comes again, with the other kids being scared off except for Tommy, Chuckie and Belinda when the Kid shows up once again with Tommy confronting her while the others watch. The Kid demands Tommy leaves, but when he refuses, she then chews bubblegum in an attempt to get it in his hair. Tommy comes prepared when he pulls out a Popsicle stick ready to pop the bubble, but the Kid swats it away from him as she makes her move closer to Tommy. Chuckie then throws Tommy a candy cane that the Kid discarded earlier and uses it to pop the bubble, getting the gum all over her and making her cry, causing her mother to rush over to her and say "Oh I could just kick myself for letting you have that gum, Prudence!", causing Tommy to be surprised by the reveal of her real name. But is forgotten as the other kids rejoice at the Junk Food Kid's defeat and them labeling Tommy a hero.

The next day, as the kids play, Prudence shows up again, having her hair cut due to the gum, but now eating carrot sticks. She offers Tommy and friends some of her snacks. They forgive her and invite her to play, making her a friend and bringing peace to the playground. 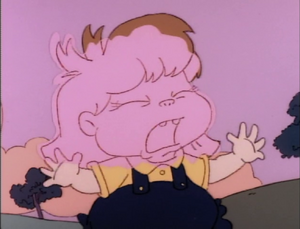 The Junk Food Kid gets defeated by Tommy. 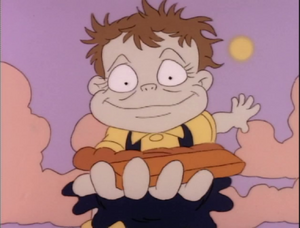