Simon Jones, also known as Psimon, is an antagonist in DC Comics. He is a psychic metahuman who mainly fights the Teen Titans.

Physicist Dr. Simon Jones was working on experiments in contacting other dimensions when he was contacted in turn by the demon lord Trigon the Terrible, the father of the superhero Teen Titan known as Raven. Trigon used his abilities to transform Jones into a powerful psychic with telepathic and telekinetic powers, and gave him the mission to destroy the Earth.

Psimon usurped Light’s role as the team’s leader during their first battle against the Teen Titans, in which he telepathically planted the suggestion in their minds to kill the Justice League. The plan failed, however, and the Five were defeated.

Trigon, growing impatient with Psimon’s lack of progress, banished his psychic minion to another dimension.

Nothing is known if Psimon faced the Teen Titans before he joined the Brotherhood of Evil. On the Brotherhood's orders, Psimon is sent with Kyd Wykkyd to defeat Raven.

After a fierce aeriel battle, in which Psimon shot a powerful psychic beam against Raven's magic beam, he opened a psychic portal in which Raven was pushed in by Kyd Wykkyd, banishing her to an unknown location.

However, Raven returned to join the Titans' battle with the villains. She confronted Psimon again and used her Raven aura to shield herself from his psychic powers. She got close enough to knock him out by giving him a hard kick. Psimon was then picked up by Kid Flash and is flash-frozen with the other villains.

Psimon is in command of powerful psychic powers, the extent of which is unknown. The only powers he has demonstrated are levitation, shooting psychic beams, and opening psychic gateways. 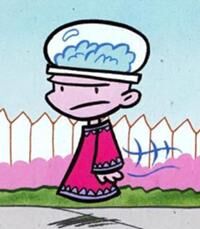 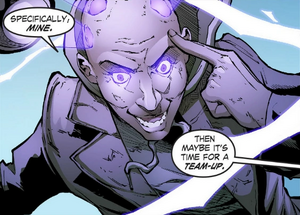