One of Judge Doom's henchmen

Watching the suffering of others.
Laughing maniacally.

Psycho is a supporting antagonist in Disney/Touchstone's 1988 hybrid film Who Framed Roger Rabbit. He is the most insane weasel in the Toon Patrol.

He was voiced by Charles Fleischer, who also played Greasy, Benny the Cab and Roger Rabbit in the same film.

Psycho is a brown weasel with sharp yellow teeth and a black nose. He is characterized by his pale blue eyes with yellow and white swirls. He wears an unbuckled white straightjacket. He also has a straight razor as a weapon. He has spiky fur by the edge of his hair. He is the only member of the Toon Patrol who does not wear a hat.

As his name implies, Psycho is psychotic and insane. He seems to be extremely funny and overall happy, as he generally grins and often laughs more than the other weasels. He apparently gets excited by the general notion of killing, as he makes a gleeful laugh when his Judge Doom dips the Toon Shoe. There is a suggestion that he loves to pretend that his straightjacket is buckled by hugging himself tightly. Psycho is also shown to be quite rambunctious when he makes a high-pitched and piercing laugh.

Psycho has only two speaking lines in the film. He is the fifth and last weasel to die, but also by losing control of his laughter. However, he loses his footing and falls on the giant rotating brush of the Dip machine, which make his body become flat and later causes it to become incorporated into a liquid so as to form a solution in a ghastly green chemical blend known as the Dip. Even after his death, he manages to remain a statement of an intention to inflict a dangerous action on someone in retribution for something done. After that, his soul then rises out of the warehouse. He turns the pressurized Dip spray back at Roger and Jessica. 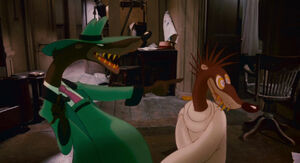 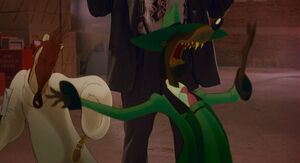 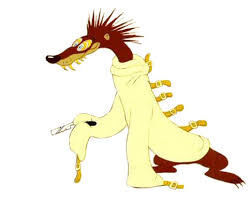 Retrieved from "https://villains.fandom.com/wiki/Psycho_(Who_Framed_Roger_Rabbit)?oldid=4117398"
Community content is available under CC-BY-SA unless otherwise noted.