Guardian and right-hand of Satan

Help Satan to remake the world populated by demons.

Psycho Jenny (or Genie) is a major antagonist in the anime/manga series Devilman. She is a enigmatic demon who has mind wiping powers. She is also loyal to Satan (the main antagonist of the series).

Psycho Jenny generally resembles a deformed human female with an abnormally large head. Psycho Jenny's most recognizable appearance has her head in place of her upper torso. Her eyes are large with hypnotic multicolored irises, and she has long untamed hair.

In her first appearances, she possesses a normal lower torso with a headless neck sometimes protruding from her scalp but later is drawn as if her legs grow directly from under her head.

Psycho Jenny's haunting, an ever-present smile is consistent across all depictions of the character.

Psycho Jenny carries an air of mystery. She very rarely speaks unless spoken to (and even then only telepathically), often just staring blankly. Unlike most demons, she doesn't appear to have any emotional investment in either the destruction of humanity or the war against God, and is only loyal to her master Satan. Although she seems to find Satan's love for Akira Fudo slightly foolish.

Here she is the one who brainwashed Satan into thinking s/he was Ryo Asuka to infiltrate the human world. She later stopped Akira Fudo from fighting demons for a time during the demon invasion and it is later revealed thet she sent mental images of the demons past into the Demon Mask for Ryo/Akira to see back in the first OVA/manga volume, since the mask was fake and did nothing without Psycho Jenny).

Here, she appears in front of Ryo Asuka and informs him that he put Amon's soul into Kaim and that she finds Ryo's Satan form prettier than his Ryo form. Ryo comments that Psycho Jenny looks the same in chibi as in her regular form ,a comment which she doesn't mind and kinda likes. In the 3rd OVA, she tells Sirene and Kaim to be happy as per Satan's orders and at the end, teleports Miki Makimura to the Violence Jack world and asks Jack where Satan is.

Psycho Jenny is among the most powerful and intelligent of the demons. The true scope of her power is impossible to gauge, but she has demonstrated the following abilities among others: hypnosis in order to put people in trances and even implant fabricated memories, mind control to take command of a being, telekinesis powerful enough to create energy blasts, telepathy which she uses to speak, and shape-shifting that varies depending on her appearances. She also is able to hide all traces of her existence from God's angels and jump in and out of reality with great ease. 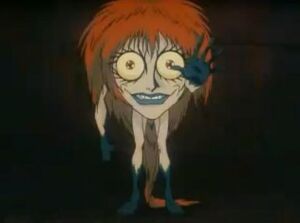 Psycho Jenny in Amon: The Darkside of The Devilman