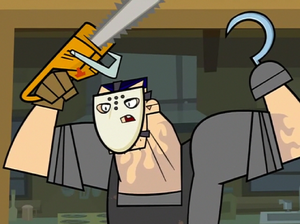 The Escaped Psycho Killer with a Chainsaw and a Hook appeared in episode 19 of Total Drama Island, a horror–themed episode in which, after watching a scary movie, the campers were set up to believe that a real serial killer like the one in the film was on the island, but the “killer” stalking them was actually Chef Hatchet. The point of the challenge was to see how the contestants would actually fare in such a situation. However, towards the end of the episode, a ‘’’real’’’ escaped psycho killer with a chainsaw and a hook inexplicably shows up in the cafeteria, where Gwen is eating a sandwich. Gwen practically ignores him, thinking he is a part of the show’s staff, but when everyone else who has already been “caught” by the fake psycho sees this on camera from backstage, they all run screaming to the cafeteria to tell Gwen that the killer is not a fake. Gwen is terrified and kicks the killer in the face, which makes his mask fall off and he suddenly starts talking, saying that it really hurt him and he is now leaving because he was treated better than this in prison. This confuses everyone.