The Second of the Four Horsmen of the Apocalypse (Revised Timeline; formerly)

Help Apocalypse cleanse the Earth of the weak so he can rule the strong in a New World Order (Revised Timeline; failed).

Psylocke in a a minor antagonist in X-Men: The Last Stand and a supporting antagonist in X-Men: Apocalypse. She is a mutant able to project purple psychic energy, usually into the form of an energy blade that can burn through metal. She is an enforcer for the information broker Caliban. Betsy becomes Pestilence, the second of the Four Horsemen of Apocalypse. After En Sabah Nur's defeat, her whereabouts are unknown.

She was portrayed by Meiling Melançon in X-Men: The Last Stand and Olivia Munn in X-Men: Apocalypse.

When the mutant cure was created, Psylocke and the Omegas protested, saying that there was nothing wrong with mutants and therefore, nothing to cure. Callisto decided to join Magneto's Brotherhood of Mutants. The rest of her group, which included Psylocke, Quill, and Arclight, followed, and became leading members of the Brotherhood.

Psylocke and the Omegas fought in the battle on Alcatraz Island, where she, Quill, and Arclight entered Worthington Labs while the rest of the mutants fought outside. Psylocke captured Warren Worthington, and attempted to kill him by throwing him off the balcony, but his son saved him before he could hit the ground. When Phoenix began to destroy Worthington Labs with her disintegration wave, Psylocke tried to escape the building but was killed.

For an unknown length of time, Betsy Braddock/Psylocke was the assistant of Caliban, a mutant who could locate other mutants. The two would eventually get approached by Apocalypse and Storm, who were in search of new members to recruit to their cause. However, after the two threatened Caliban, Psylocke held both mutants at knifepoint with her blades. Amused, Apocalypse convinced her to join them before giving the mutant more power and a new uniform. Psylocke would then accompany the two as they recruited Angel and Magneto.

Upon capturing Xavier and seizing control of Cairo, Apocalypse prepares to transfer his consciousness into the mutant while ordering his followers to protect him. When a group of mutants led by Mystique arrive aboard a jet, Psylocke gets into a fight with Beast which ultimately culminates in her getting thrown onto a rooftop. Later, as the mutants rescue Xavier and attempt to flee, Angel and Psylocke manage to get onto the jet as it takes off. However, thanks to Nightcrawler's ability to teleport, the heroes escape, leaving the two mutants behind on an aircraft heading towards the ground. Although Psylocke manages to get blown off, Angel is unable to escape as the jet crashes and explodes. Following Apocalypse's demise at the hands of Jean Grey, Cyclops, and Magneto, Psylocke leaves the area. 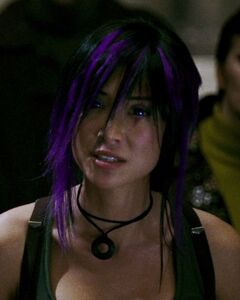 Psylocke on the X-Men Movies Wiki